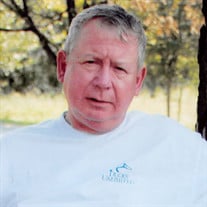 Amory— Michael Harold Howell, 65, passed away on Tuesday, March 19, 2019, at North Mississippi Medical Center in Tupelo. Born in Memphis, TN on January 17, 1954, he was the son of the late Harold Hugh and Nolie Jones Howell. Michael graduated in 1972 from Overton High in Memphis. He married the love of his life, Karolyn, June 30 of 1972, and together they raised two children. He had a distinguished career of thirty-two years with the US Army Corp of Engineers. Michael was instrumental in the construction of the Tennessee-Tombigbee Waterway, where he served as a project engineer. He spent much of his free time after retirement helping with his wife’s daycare. Through this, he was able to make a great impact in many lives throughout the community. He was loved by many. Michael enjoyed taking trips to the family farm, hunting, fishing, and cooking. He had a large stamp and coin collection that he enjoyed adding to. He took a special interest in mailing labels and letters. Michael loved old country music. He was an avid bird enthusiast, but loved all of God’s creatures. In addition, he was a talented wood worker and enjoyed working in his shop. Michael was caring, wise, and hard-headed. He was known for his great sense of humor and loved for his old soul. He was affectionately known by his grandchildren and the children at daycare as “Poppy.” Memories of Michael will be cherished and remembered in the hearts of his loved ones forever. Michael is survived by his loving wife of 47 years, Karolyn Howell; daughter, Lisa Rutherford (Lee); son, Tim Howell (Dana); and grandchildren, Ethan Howell, Eli Howell, Easton Howell, Gracey Rutherford, and Micah Rutherford. A memorial service will be held at 6:30 PM Thursday, March 21, 2019, at E.E. Pickle Funeral Home, with Mr. Derrick Maranto officiating. A private burial will be held at a later date at the family farm. Memories and condolences may be shared with the family at eepicklefuneralhome.com

The family of Michael Harold Howell created this Life Tributes page to make it easy to share your memories.