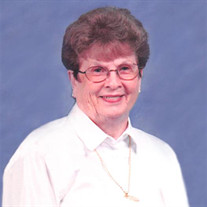 Amory— Merle Cother Roberts, 93, passed away peacefully on Monday, July 9, 2018, at Oak Tree Manor. Merle was born on November 13, 1924, in Wren, MS. She was a daughter of Benjamin Ulysses and Sue Emma Matthews Cother. Merle attended Wren Schools as a child and graduated from Amory High School with the Class of 1943. She then moved to Memphis, TN to attend business school. She later returned to Amory and worked for the Monroe County Health Department for many years. In July of 1966, Merle married the love of her life, Porter Roberts in Greenwood, MS. Merle and Porter were beautiful dancers, and their family remembers fondly the first dance of the couple, to “Stranger on the Shore.” Later in life, she worked for C & F Contracting in Tupelo. Merle was a lifetime member of First United Methodist Church in Amory. She held this church in a special place in her heart and was very faithful and devoted to her church family in all ways. Merle was a very unique woman. She could make anyone laugh and was never afraid to speak her mind. She was very opinionated, but this trait just made her even more loveable. Merle was always engaged in her community and her family. She was always at events and made an effort to be a part of everyone’s lives. Merle was always happy, and was known for her generous nature. She loved to socialize and go out to eat, where she would likely do more socializing than eating. Merle had a special relationship with dogs and all four-legged animals. In her free time, she was an avid reader and enjoyed listening to Big Band music. Her favorite song to play on a jukebox was “Harbor Lights.” Merle was known fondly as the epitome of a Southern Lady. She lived a beautiful life and loved spending time with her family. She will forever remain in the hearts of her loved ones and those who knew her. Merle is survived by her daughter, Portia Roberts Bakker (Terry), Salina, KS; son, Neil Raymond Roberts (Susan), Jacksonville Beach, FL; grandchildren, Audrey McGovern (Leon), Lee R. Bakker (Jaime), Wichita, KS, William R. Bakker (Andrea), also of Wichita, KS; great-grandchildren, Hannah, James, Eleanore; nieces and nephews, Ben Cother (Peggy), Wren, Karen Cother Boyle, Atlanta, GA, Norma Cother, Tupelo; and great nieces and nephews, Kristen, Jason, and Justin. In addition to her parents, she was preceded in death by her husband, Porter Raymond Roberts; nephew, John Ed Cother; brother, Edward T. Cother (Virginia); and sisters, Bessie and Roberta Cother. A funeral service will be held at 4 PM Friday, July 13, 2018, at First United Methodist Church in Amory, MS. Rev. Wesley Pepper and Rev. Don McCain will be officiating the service. Pallbearers will include Rodney Summerford, Ned Young, Rufus Palmer, Doug Fowlkes, Dickie Miller, and Billy Kirkpatrick. Burial will follow in Masonic Cemetery, Amory. Visitation for Merle will be from 2 PM until the service hour at the church. The family of Merle Roberts would like to extend a special thank you to the staff at Oak Tree Manor for their love and support, and caregiver/friend, Mary McNairy. In lieu of flowers, donations may be made to First United Methodist Church, 107 3rd Street, Amory, MS 38821. Memories and condolences may be shared with her family at EEPickleFuneralHome.com.

The family of Merle C. Roberts created this Life Tributes page to make it easy to share your memories.

Send flowers to the Roberts family.