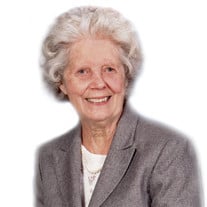 Wren- Mary Rebecca Boyd, 87, passed away peacefully on Thursday, August 29, 2019. Born on January 8, 1932, in Monteagle, Tennessee. She was the daughter of Alexander and Emma Rose Layne. Mary was a graduate of Hume Fogg High School in Nashville, Tennessee. Upon graduation she attended Draughn’s School of Business (Nashville) where she met her lifetime partner, James Boyd. This past March they celebrated their 67th wedding anniversary. Her husband’s military service led them to travel and live in the following places supporting his military duties: Keesler AFB (Mississippi), Itazuke AFB (Japan), Bergstrom AFB (Texas), and Fort Campbell (Kentucky). Currently she resided with her daughter and son-in-law in Wren, MS. Beside her dedication to raising her family, she periodically took part time jobs working as a telephone operator, Veteran’s Home secretary, and a supplier of McCormick Spices. She later in life completed 2 years of Art Education classes at Austin Peay State University (Clarksville, Tennessee). She was an accomplished oil painter. Her paintings were twice featured in displays at art shows where she was awarded and recognized. Mary was also a very creative seamstress. She loved to crochet and knit. Her creativity was often shared with others she encountered. Her paintings reflected the beauty she saw in nature and her appreciation to God for his creation. She daily enjoyed a quiet time of Bible study and devotion. She loved to sit on the porch and watch the birds and nature at work. In the places her family lived she was a supporter to the churches they attended serving as a children’s Sunday School teacher or choir member. Mary was a member of the First Baptist Church of Amory. She attended the First Friends Respite Group. Her memories slowly faded over the fifteen years she struggled with Alzheimers, but she never lost her sweet spirit and grateful heart. Even in her last years she continued to see the good in the world and people that surrounded her. Besides her parents, she was preceded in death by her husband (James Boyd), a son (James Boyd Jr.) and sisters (Wilhelmina Mullins, Artie Mae Lappin) and brothers (Cleveland Layne, Bonnie Layne, and Alex Benson Layne). She is survived by her daughter, Donna Jones (Glen) of Wren; grandchildren, Andy (Erin) of Huntsville, AL and Mary (Tyler) Sholes of Chattanooga, TN; great grandchildren, Joshua and Rebekah Sholes, and a sister Patsy Harris, Portage, IN. The family also recognizes the following devoted caregivers that supported and assisted the family in her care: Lifeline Companions in Amory, especially Tyrechia Ivory and Annie Buchanan, First Friends Respite Group under the direction of Mary Nell Dorris, and the staff at The Meadows in Fulton. Her funeral will be held at 10 AM, Friday, August 30, 2019, at E.E. Pickle Funeral Home, Amory, with Dr. Allen Simpson officiating. Burial will follow in the Corinth National Military Cemetery. Visitation will be from 9 until 10 AM on Friday. She would best be honored by making contributions to First Friends Respite Center c/o First Baptist Church in Amory, MS. Memories and condolences may be shared with her family at EEPickleFuneralHome.com.

Wren- Mary Rebecca Boyd, 87, passed away peacefully on Thursday, August 29, 2019. Born on January 8, 1932, in Monteagle, Tennessee. She was the daughter of Alexander and Emma Rose Layne. Mary was a graduate of Hume Fogg High School in Nashville,... View Obituary & Service Information

The family of Mary Rebecca Boyd created this Life Tributes page to make it easy to share your memories.

Send flowers to the Boyd family.