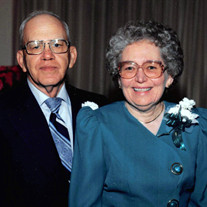 Mary Jo Minich, 83, passed away on June 22, 2019, at North Mississippi Medical Center in Tupelo, MS. Born on March 10, 1936, in Amory, MS, she was a daughter of Thomas Balvin Nash and Bessie Jo Farley Nash. Mary Jo graduated with the Amory High School class of 1954. After graduating, she met the love of her life in Memphis, TN, Mr. R. C. Minich, Jr. He was serving in the United States Navy and they were married on December 25, 1954, for over 48 happy years. They were blessed by God with three children and her family gave her the most enjoyment in life. Mary Jo never met a stranger and she always had a smile on her face. She worked at various garment jobs including Amory Garment from 1975 through 1984 as well as Mc Coy Manufacturing in the late 1990’s where she retired. Mary Jo loved the Lord and she was a long time member of New Hope Primitive Baptist Church. She loved her church greatly and she exemplified her faith through her actions, as she was always serving and never spoke ill of anyone. Mary Jo was a kind giving soul who loved baking for others and doing things for people in need. A woman with a green thumb, she was excellent at growing asparagus, strawberries and flowers. She was also a talented seamstress. In her free time, she liked to collect marbles, watch Hallmark Movies and collect Salt & Pepper shakers. Old Country and Gospel Music always brought a smile to her face. She had so many friends and the memories they made over the years will be cherished forever. Friends often described her as a very loving dear person. Although they will miss her greatly, her family and friends rejoice in the fact that she is now with her Savior. Mary Jo is survived by her two sons, Tommy Minich (Kim), Amory, Criss Minich (Amie), Olive Branch; grandchildren, Zack Minich, Gabrielle Hardin, Hayden Minich, Ryan Minich, and Claire Minich; 3 great-grandchildren; several nieces and nephews; special friends, Shirley Parchman, and Hilda Ruth McNeese. In addition to her parents, she was preceded in death by her husband, R. C. Minich, Jr., a son, Terry Minich and brother, Greely Ray Nash. A Celebration of Life service for Mary Jo will be at 1:00 PM, Tuesday, June 25, 2019, at E. E. Pickle Funeral Home with Bro. Tim Cunningham officiating. Burial will follow in Amory Historical Cemetery. Pallbearers will be Ryan Minich, Hayden Minich, Gary Hudson, Reggie Minich, Randy Nash, Bobby Stanford, and Van Rogers. Visitation for Mary Jo will be on Monday evening from 5:00 – 8:00 PM at the funeral home. In lieu of flowers, memorial may be sent to the New Hope Primitive Baptist Church, 60267 Hatley Road, Amory, MS 38821 Please share your memories and condolences with her family at eepicklefuneralhome.com

The family of Mary Jo Minich created this Life Tributes page to make it easy to share your memories.

Send flowers to the Minich family.