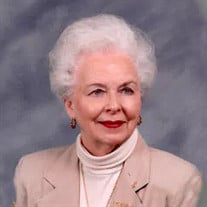 Amory- Martha Dobbs Monaghan passed away on Monday, May 14, 2018, at Merit Health Gilmore Hospital, in Amory, MS. She was born on December 6, 1926 in Memphis, TN to the late K.D. Dobbs and Blanche Dobbs Wright. Martha graduated from Amory High School with the class of 1943. She was chosen as the homecoming queen for 3 years, from 1941-1943. During high school, she was Bond Queen at the Miss Mississippi Pageant in 1943. She attended Belhaven College from 1943-1945. She married Joe Q. Monaghan on December 8, 1945 and together they were blessed with three daughters. She worked in the Monroe County Sheriff’s office while her husband served as Sheriff. In 1951, she was appointed interim Sheriff of Monroe County Sheriff’s department. Later she was employed by the Amory school district as secretary of the Middle School. She also served as an office clerk for Amory Garment Company and the Monroe County Health Department. Moving to Jackson in 1965, she served as the manager of the Hinds Madison Rankin TB association and retired as the Public Relations Director of the Mississippi Lung Association after serving for 23 years. She was also the recipient of the 1988 Mississippi Lung Association Distinguished Service Award. After returning to Amory, she was employed for 14 years at the Amory Regional Museum. With all of the positions she held, she served with a willing heart. Martha loved her family, friends, and her fellow church members. She was a member of Beta Sigma Phi Sorority. She was a member of First United Methodist Church where she taught Sunday school and was active in both UMW and the Heritage Committee. A giving and sharing person, she always helped those in need. She often would send cards and letters to friends and family members to encourage and let them know she was thinking of them. Some of the charities dear to her were the American Lung Association, her church, the Palmer Home, St. Jude and the Amory Animal Shelter. In her free time, she enjoyed listening to gospel and Big Band Music as well as classic rock and roll. She was blessed by God with many friends during her lifetime, too many to list individually. She liked to keep in touch with those friends and spend time with them. She enjoyed cross stitching, reading, and staying in touch on Facebook as well. Martha is survived by her daughters, Marsha Monaghan Ballard, Aberdeen, Dr. Christy Monaghan, Starkville, and Martha Jo “Dee” Monaghan Howard(Seth), RIdgeland; grandchildren, Deanie Fanning (Johnny), Scott Ballard (Colleen), Madeline and Joe Howard; great-grandchildren, Tyler Fanning; Ben, Zack, and Sabrina Ballard; brother, Jere K. Dobbs, Georgia; special life-long friend, Myrtice Johnson, Amory; several nieces and nephews. In addition to her parents, she was preceded in death by her beloved husband, Joe; sister, Dorothy D. Gevatoski; brother, Bobby Dobbs; and aunt, Mattie Glozier. A celebration of life service for Martha will be at 2:00 PM, Thursday, May 17, 2018 at First United Methodist Church, Amory, with Rev. Wesley Pepper and Rev. Don McCain officiating. Burial will follow Masonic Cemetery. Pallbearers will be Seth and Joe Howard; Pete Patterson; Tyler Fanning; Larry Clark; Doug Beckham. Honorary pallbearers will be Johnny Fanning, Jay Cunningham, Scott Ballard, Joe Brennan, Steve Randle, Steve Hunt, Steve Strawbridge. Visitation will be from 5 -8 PM, Wednesday at E. E. Pickle Funeral Home, Amory. She will lie-in-state at the church from 1 - 1:45 PM, Thursday. Memorials may be given to FUMC, PO Box 147, Amory, MS or the Palmer Home, PO Box 746, Columbus, MS 39703 or the MS Lung Assn., PO Box 2178 Ridgeland, MS 39158. Memories and condolences may be shared with her family at EEPickleFuneralHome.com.

Amory- Martha Dobbs Monaghan passed away on Monday, May 14, 2018, at Merit Health Gilmore Hospital, in Amory, MS. She was born on December 6, 1926 in Memphis, TN to the late K.D. Dobbs and Blanche Dobbs Wright. Martha graduated from Amory... View Obituary & Service Information

The family of Martha Dobbs Monaghan created this Life Tributes page to make it easy to share your memories.

Send flowers to the Monaghan family.