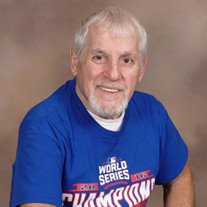 Amory - Mario G. Cappuzzello, 80, passed away on Saturday, January 16, 2021 at the Vineyard Court Nursing Center in Columbus, Mississippi. He was born in Chicago Illinois, to the late Rosario and Concettina Distenfano Cappuzzello. Mario grew up in White Rock Arkansas and attended High School there. He worked at Wal Mart for several years where he served the public. He married the love of his life, Bessie Carylon Oliver Cappuzzello on November 18, 1987. Carylon and he made many memories through the 34 years they were married and he was blessed with two step daughters whom he loved very much. Mario was a member of St. Helen’s Catholic Church in Amory and he loved his fellow church members. In his free time, Mario loved to dance. He was not shy and enjoyed letting loose when the music started, especially Country and rock and roll. A musician himself, he liked to play the accordion. He enjoyed a great meal, watching tv and visiting with different people. Later in life, when he moved into the nursing home to get great care, he really enjoyed getting to know the staff of the nursing home as well as the residents. Although his presence will be greatly missed here on earth, his family celebrates knowing that he is with his Lord and Savior. His is survived by his wife, Bessie Carylon Oliver Cappuzzello, Amory; step daughters, Elizabeth Paterakis, Florida, Diane Malone (Greg), Columbus; brother, Bill Cappuzzello (Phyllis), Chicago, IL; nieces, Tina Cappuzzello, Linda Cappuzzello; nephew, Joseph Cappuzzello; step grandchildren, Marshall, Caryann, Anthony and Reagan Malone. He was preceded in death by his parents, Rosario Cappuzzello and Constantina Cappuzzello; sister, Mary Lou Cappuzzello. A private family memorial service will be held at a later time. Memories and condolences may be shared with his family at EEPickleFuneralHome.com

The family of Mario G. Cappuzzello created this Life Tributes page to make it easy to share your memories.

Send flowers to the Cappuzzello family.