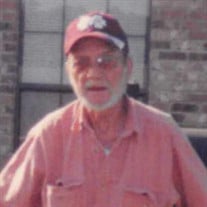 Nettleton – Mackey “Cosmo” Franklin Jr., 72, passed away at his residence on Monday, July 31, 2017. Born on November 7, 1944, in Sulligent, AL, he was a son of the late Mathis and Lilly Mae Rogers Franklin. Mackey graduated from Sulligent High School with the class of 1962. He began his occupation in transportation and drove for Parham Trucking. Mackey enjoyed dirt track racing and NASCAR, and he was especially a fan of Dale Ernhart Jr. A true jokester, he loved to put a smile on people’s faces. Mackey had a heart for helping people. He loved to spend time with his grandkids and family. His memory will continue to bring a smile on his family’s faces, as he leaves behind a legacy of love and happiness. Survivors include son, Danny Franklin (Teresa), Nettleton; grandchildren, Casey, Anthony, and Grant Franklin; sister, Edna Cox (Richard), Smithville; brother, O’Neal Franklin (Carolyn), Guin, AL; nieces and nephews, Tim and Terry Knight, Teresa Blaylock, and Dennis Rawls. A celebration of life service will be held on Thursday, August 3, 2017, at 2PM at E.E. Pickle Funeral Home, Amory, with Bro. Danny Burks officiating. Burial will be in Young Memorial Garden in Smithville. Pallbearers will be Tim Knight, Terry Knight, Anthony Franklin, D.W. Holcomb, Johnny Snow, and Tim Klasser. Honorary pallbearer will be Grant Franklin. Visitation will be held on Thursday, August 3, at E.E. Pickle Funeral Home, Amory, from 12:30-1:50PM. Memories and condolences may be shared with the family at eepicklefuneralhome.com.

The family of Mackey Franklin created this Life Tributes page to make it easy to share your memories.

Send flowers to the Franklin family.