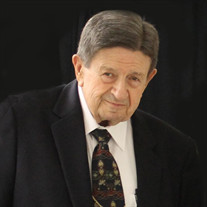 Amory— Bro. Mac Phillips, 82, saw Jesus face-to-face on Friday, August 24, 2018. Born in Monroe County on July 30, 1936, he was a son of Bill and Euple Sanders Phillips. Bro. Mac was a graduate of Becker Schools and Bible College. After his high school graduation, Mac left to serve in the U.S. Air Force for two years before returning home to marry his sweetheart, Betty Jane, on August 14, 1954. He began his career at Pullman Couch, where he was a manager for 20 years. Mac was then called to serve his Lord in ministry. Mac began preaching at Calvary Baptist when he was 30, where he served the Lord and his congregation faithfully for 47 years. He also served as a pastor for Calvary Baptist in Reform for about 3 years. Witnessing to others gave him great enjoyment in life, and he loved to share the Word with everyone he met. Mac was known for his quirky sayings and his never-ending encouragement. He touched countless lives throughout his years of ministry, and will not soon be forgotten by the community who knew and loved him. In his free time, Mac enjoyed taking frequent trips to Walmart, visiting people, and talking to people on the phone. He was always available when others were in need. He could often be found at his mail box, sending out letters and paying bills. He was particularly passionate about St. Jude Children’s Hospital, LeBonheur, and the Smile Train project. Bro. Mac enjoyed a few hobbies, such as collecting miniature tractors, watching the Inspirational Channel, and listening to good Southern Gospel music. He was especially fond of the Gaithers, the HeeHaw Gospel Quartet, and Howard and Vestel Goodman. Mac always had wise words of comfort and prayer for those who sought his advice. His faith in the Holy Trinity guided him to lead others out of the darkness and show them the way. Mac was a God-fearing, gentle, selfless person. He had a compassionate heart and never met a stranger. His family takes comfort in knowing that he is now with his Creator, who has welcomed His loyal servant home. Bro. Mac is survived by his son, Steve Phillips, Amory; brother, Jimmy Phillips (Frankie), Amory; grandchildren, Eric Phillips, Amanda Phillips, Stephanie Vanegas (Jeff); great-grandchildren, Tyler and Abby Phillips, Mason “Cricket” Cates; sister-in-laws, Nellie Phillips, Mary Lou West; several nieces and nephews; special friend, Jane Hoots, Clyde Moody, and all of his church members over the years; along with his special companion and dog, Sweetums. In addition to his parents, Mac was preceded in death by his wife, Betty Jane Phillips; and brother, Dennis Phillips. A funeral service will be held at 3 PM on Monday, August 27, 2018 at Meadowood Baptist Church, Amory. Bro. Bobby Cleveland and Bro. Jacob Rutledge will lead the service. Burial will follow at Hatley Cemetery. Pallbearers will include Tyler Phillips, Tim Jaynes, Steve Junkin, Toby McAteer, Kenny Elmore, and Allen Lee. Honorary pallbearers will be Earnest Mitchell, Jim Best, Clyde Moody, Thomas Harrison, John Langford, and Ralph Mitchell. Visitation will be from 5-8 PM Sunday, at the funeral home. In lieu of flowers, donations may be made to St. Jude Children’s Hospital, 501 St. Jude Place, Memphis, TN 38105; to LeBonheur Children’s Hospital, 848 Adams Ave, Memphis, TN 38103; and to Smile Train, 633 Third Ave 9th Floor, New York, NY 10017 Memories and condolences may be shared with his family at our website: EEPickleFuneralHome.com.

The family of Bro. Mac Phillips created this Life Tributes page to make it easy to share your memories.

Send flowers to the Phillips family.