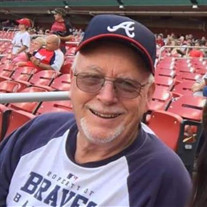 Amory— Lynn “Sarge” Vickery, 70, passed away on Sunday, January 27, 2019 at the VA Hospital in Birmingham, AL. He was born in Gainesville, GA on August 18, 1948 to the late Asa Mac and Sarah Hudson Vickery. Sarge attended Gainesville Elementary School in Gainesville, GA. He graduated from Carlisle Military School in South Carolina before attending Linier Tech in North Georgia. Sarge enlisted in the U.S. Air Force, where he served for over 20 years across the globe: from Oklahoma, Texas, North Carolina, and Alaska, to Okinawa, Japan, Germany, Korea, and the Philippines. He was stationed with the weather squadron in Alaska, and he also taught a class in North Carolina. Sarge was a transportation specialist, cargo specialist, and cargo instructor during his years with the Air Force before his retirement. He enjoyed working with his equipment and cultivated lifelong friendships at every base he was stationed. A competitive athlete, he made many memories with his friends playing Racquetball on base and with the military baseball leagues. Sarge was well loved, and cherished his innumerable friendships. Sarge married his loving wife, Joyce, on November 4, 1990. He was a devoted family man with the guiding philosophy of “Keep things simple.” An honest, selfless man, he never met a stranger. Sarge was a servant to his community, county, and church and lived his life through his faith in Christ. He was a faithful member of Calvary Baptist Church, where he served as a sound technician. One of his favorite pastimes was attending the Atlanta Braves games. Sarge will be dearly missed by those who knew and loved him; however, the memories will live on for many years to come. Sarge is survived by his wife, Joyce Vickery, Amory; daughters, Amy Pettus (John), Hoover, AL, Lindsay Deason (Jamie), Woodstock, AL; sons, Randy Vickery (Bernadette), Belleville, IL, Don Barnes II (Allyson), Charlottesville, VA, David Barnes (Jennifer), Amory; grandchildren, Tannah Deason, Brock Deason, Gabe Deason, Maegan Vickery, Isabell Foster, Angilica Mangaliman, Elora Barnes, Joshua Barnes, John Mangaliman, Fletcher Barnes, Haedyn Barnes, Ava Barnes; great-grandchildren, Zoe and Sabastian Foster; and many nieces and nephews. Mr. Vickery's funeral service will be held at 11AM Friday, February 1, 2019 at E.E. Pickle Funeral Home. Bro. Rodney Waycaster will officiate the service. Burial will follow at New Hope Cemetery in Hatley. Active pallbearers will include Charlie Branham, Evan Branham, Melvin Parker, Charles Marshall, John Pettus, and Jamie Deason. Lamar Minor and Jimmy Edwards will serve as honorary pallbearers. Visitation for Sarge will be Thursday, January 31, 2019 from 5PM-8PM, at the funeral home. Please feel free to share any memories and condolences with his family at eepicklefuneralhome.com

The family of Lynn "Sarge" Vickery created this Life Tributes page to make it easy to share your memories.

Send flowers to the Vickery family.