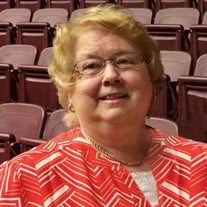 Smithville – Lynda Sue Nix, 77, became totally healed and met her Savior face to face on Tuesday, September 21, 2021. Born on January 13, 1944, in Pontotoc, Mississippi, she was the daughter to the late Charles Hubert Branham and Essie Modean Franklin Branham. Sue grew up in Pontotoc County. She graduated from Smithville High School and earned her Associates Degree in Early Childhood Development. She enjoyed working with children and worked a career for Lift, Inc. as a Head Start Teacher. Sue touched many lives during her career and she had a great way with children. She married the love of her life, John William Nix on February 22, 1962, in Amory, MS. They were blessed with three children, grandchildren and great-grandchildren. In addition to the children God gave them, they also helped raise many foster children through the years. She had a heart of gold and selfless attitude towards children. Sue lived out her faith daily and she was a longtime member of Faith Baptist Church in Amory. She often put others first and she loved God. She contributed Bibles to the jail ministries in Monroe County for close to 10 years. During her lifetime, she helped many others see the love of Christ through her actions. She was kind and compassionate and will be missed greatly. No words can describe all that she meant to her friends and family. She leaves behind great memories and guidance they can reflect upon through the years. Her legacy of a great Christian woman will live on in the hearts of those who knew and loved her. She leaves behind her sons, John Alan Nix, Smithville, John Anthony “Tony” Nix, Smithville; daughter, Lynda June Harbin, Amory; grandchildren, Jenny Nicole Jaudon (Wyatt), Cross Nix, and Lauren Bentley (Nate); greant-grandchildren, Charleigh Bentley and Nora Bentley; brothers, Billy Branham, Smithville, and Charlie Branham (Anita), Hatley; sister, Jerri Nash, Smithville; many nieces and nephews. In addition to her parents, she was preceded in death by her loving husband, John William Nix; sisters, Pat Hudson, and Charlotte Hester. A Graveside Funeral Service will be held on Friday, September 24, 2021 at 3:00 pm, at Hatley Cemetery, Hatley, Mississippi, with Bro. Scott Carter officiating. Pallbearers will be Phillip Branham, Bert Nash, Wyatt Jaudon, Randy Nash, Ricky Hudson, and Mark Hudson. Honorary pallbearer will be Justin Nash. There will be no public visitation. Memories and condolences may be shared with her family at EEPickleFuneralHome.com.

Smithville &#8211; Lynda Sue Nix, 77, became totally healed and met her Savior face to face on Tuesday, September 21, 2021. Born on January 13, 1944, in Pontotoc, Mississippi, she was the daughter to the late Charles Hubert Branham and Essie... View Obituary & Service Information

The family of Lynda Sue Nix created this Life Tributes page to make it easy to share your memories.

Send flowers to the Nix family.