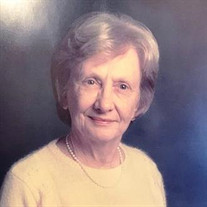 Lucy Dale Bourland Scott, 95, passed away on Tuesday, January 23, 2018 at North Mississippi Medical Center. Born in Amory, MS, on September 22, 1922, she was a daughter of the late Ebenezer Carroll and Eva Mae English Bourland. She graduated from Amory High School and attended Mississippi State College for Women in Columbus. She married the late F. Wallace Scott on January 6, 1945. They were married for 55 wonderful years. Together, Wallace and Lucy had 5 children. She and Wallace loved raising their children together. Her passion was being a good wife and loving mother. When the girls were little, she enjoyed sewing and smocking for them. As her children grew and had families of their own it was their joy to have everyone gather at home as often as possible. Other pastimes she enjoyed was participating in bridge club and she was also a founding member of the Century Club. She and Wallace loved to dance and were members of the Dance Club. Lucy was gracious and soft spoken, but she had a wittiness and humorous way with words that she kept all her life. She had a nurturing manner and she enjoyed feeding and watching birds and tending her flower gardens. Her greatest passion was her faith in God. She was a lifelong member of First United Methodist Church in Amory. She led her life by the words of Christ. One of her favorite quotes was, "Life’s greatest tragedy is to lose God and not miss him." Survivors are daughters: Lynn Haley (Johnnie), Amory; Dale Stanford, Tupelo; Semmie Wicker (Tom), Tupelo; daughter-in-law, Minnie Scott, Amory; nine grandchildren, eleven great-grandchildren and a host of nieces and nephews. She was blessed with sitters who dearly loved her and who she loved as well. In addition to her parents, she was preceded in death by her husband, F. Wallace Scott; two sons: Ben and John, one sister and two brothers. A celebration of life service for Lucy Scott will be at 2:00 P.M. on Friday, January 26, 2018 at the First United Methodist Church, Amory, with the Rev. Wesley Pepper and Rev. Pat Ludlum officiating. Burial will follow in Masonic Cemetery. Pallbearers will be Luke Stanford, Jeffrey Logan, Benjamin Scott, Dylan Scott, Lance Bickerstaff, Scott Haley, John Haley and Seth Sloan. Visitation will be from 12:00 pm until 1:45 PM Memorials can be made to the First United Methodist Church, P.O. Box 147, Amory, MS 38821

Lucy Dale Bourland Scott, 95, passed away on Tuesday, January 23, 2018 at North Mississippi Medical Center. Born in Amory, MS, on September 22, 1922, she was a daughter of the late Ebenezer Carroll and Eva Mae English Bourland. She graduated... View Obituary & Service Information

The family of Lucy Bourland Scott created this Life Tributes page to make it easy to share your memories.

Send flowers to the Scott family.