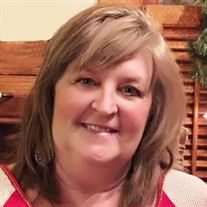 Tupelo - Lois Marie Cowan Sanderson , 61, passed away Thursday, June 11th, 2020 at Baptist East Medical Center in Memphis, TN. She was born in Amory, MS, on December 16, 1958, to Otis Hiron Cowan, Jr. and the late Georgia Carolyn Owen Cowan. She attended Amory High School and continued her studies at Mississippi State University where she was a Delta Gamma and earned a Bachelor’s Degree in Education. Lois began her career at GMAC, then transitioned to the banking industry, including BancorpSouth in Tupelo, MS. Most recently she served in the Department of Strategy as a data analyst with North Mississippi Medical Center. Lois was a creative and multi-talented person who enjoyed many extracurricular activities including painting, cooking, and spending time at the beach with her family and friends. She loved all God’s creatures including her cats, Elvis and Molly, and her dog, Honey. She loved and cherished her family and friends and never met a stranger. Survivors include her father, Otis Hiron Cowan, Jr ; two sisters, Georgia Cowan Marlin and Barbara Cowan Hughes; a brother, Otis Hiron Cowan, III; two nephews, Brett Marlin and Tyler Marlin; three nieces, Amanda Hughes, Carrie Hughes, and Caitlin Marlin Shiyou; a great nephew, Parks Shiyou; and former husband, Jay Sanderson. She was preceded in death by her mother, Georgia Carolyn Owen Cowan, and two brother-in-laws, Ewel Hughes and Mike Marlin. Due to health concerns related to COVID-19, there will be no visitation; funeral services on Saturday, June 13, 2020, will be private. Burial will be at the Durrett Memorial Cemetery in Quincy, MS. In lieu of flowers memorials may be sent to Tupelo-Lee Humane Society, 2795 Cliff Gookin Blvd, Tupelo, MS, 38801 or First United Methodist Helping Hands Ministry , P.O. Box 854, Tupelo, MS, 38802. Tributes may be posted at eepicklefuneralhome.com

The family of Lois Cowan Sanderson created this Life Tributes page to make it easy to share your memories.

Send flowers to the Sanderson family.