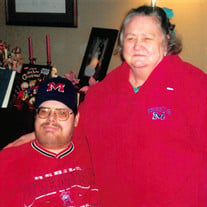 Amory - Lily Gay Langford, 75, met her Savior face to face on Friday, October 23, 2020. Born on February 18, 1945, in Adairsville, Georgia, she was a daughter of the late Robert Lee McGaskey and Gertrude Olivia Smith McGaskey Buys. Lily grew up and attended public schools in Georgia. In her early twenties, she became blind and she preserved throughout her whole life. Lily worked at Signature Works in Hazelhurst, MS, for several years. She married the love of her life, John Thomas “Tommy” Langford on June 6, 1998, and together they enjoyed many years of happiness and love. She was a member of East Amory Baptist Church and she loved the Lord. Lily was a servant and was proud to be a great wife, who could love and take care of her husband, despite her vision loss. Lily was a great cook and she also could sew just about anything. Once she was unable to care for herself and her husband, they became residents at Diversicare Nursing Center. The staff and residents there became their extended family and the Langfords at one point were crowned the Valentine King and Queen. Their love for each other was something to behold. Lily will be missed dearly by her soulmate, Tommy, as well as her many family members and friends. They are at peace knowing that she is in Heaven. She is survived by her loving husband, Tommy Langford, Amory; sisters, Shirley Gunn and Barbara White, Georgia; brothers, Leonard McGaskey and Larry McGaskey, Georgia; brother-in-law, Dale Langford (Vickie), Wren; special niece, Kelly Mathews (Jim) and their children, J.D., Tori, and Lola Jane; special nephew, Taylor Langford (Molly); and a host of other nieces and nephews. In addition to her parents, Lily was preceded in death by her sister, Ethel Hall. A graveside funeral service will be held on Sunday, October 25, 2020, at 1:30 pm, at Wren Cemetery, Wren , MS, with Pastor Dennis Smithey officiating. Pallbearers will be Dale Langford, Richard Milstead, Taylor Langford, Jim Matthews, Robert Clyde Buchanan, and Mark Buchanan. Honorary pallbearers will be the residents and workers at Diversicare Nursing Center of Amory. Donations in lieu of flowers may be made to St. Jude’s Children’s Research Hospital, 501 St. Jude Place, Memphis, TN. Memories and condolences may be shared with her family at EEPickleFuneralHome.com

The family of Lily G. Langford created this Life Tributes page to make it easy to share your memories.

Send flowers to the Langford family.