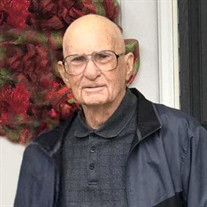 Leon Lloyd “Lynn” Howell, Jr. Becker – Leon Lloyd “Lynn” Howell, Jr., went home to be with his Savior on Wednesday, December 2, 2020. Born on December 16, 1930, in Athens, he was the son of the late Leon Lloyd “Lynn” Howell, Sr. and Dorothy Louise Killian Howell. Lynn grew up in Athens and graduated from Becker School with the class of 1948. He served our country in the US Army during the Korean War and was a member of the VFW. After his service in the military, he worked for Jones Butane, where he drove a gas truck, Conoco, and American Potash/Kerr-McGee, where he held many positions. In addition to his regular career, he was also very involved with the education of the children of Monroe County. He served on the Monroe County School Board for over 25 years. He made many longtime friends while supporting his community and advocating for education. A great provider for his family, he was blessed with a loving wife and four children. He was a member of River Bend Baptist Church where he served as a deacon at one time. In life, Lynn always reminded others that Jesus should be number one. Some of his favorite music was Gospel and the Hymn Amazing Grace. He also listened to Old Country music as well as music from the 40’s and 50’s. Lynn’s favorite phrase was ‘hang tight’, and he expected his children and grandchildren to always do their best and excel in school. Some of his favorite past times were quail hunting with his bird dogs, working in his vegetable and flower gardens, fishing and hunting, square dancing, solving crossword puzzles, playing Rook and Dominoes. Above all, he liked spending precious time with his wife and large family. Many wonderful memories will be cherished by his family and friends. The contributions he made and the example he set for his family and the community will have a lasting impact for generations to come. Left behind to treasure his memories are his wife, Helen, Athens; daughters, Dorothy “Dody” and Jody Ogletree, Raymond, Margaret Shields, Columbus; sons and their wives, Daniel and Anna Howell, Becker, Matthew and Amanda Howell, Athens; grandchildren, Lee and Joseph Lynn Ogletree; Kaleena and Antwann Richardson; Lesley and James Jones; Jared Shields; Kaitlin Howell; Ryan and Brittany Howell; John Mark and Maggie Howell; Kelby Howell; Zachary Hawkins; Grant Hawkins; Laney and Jack Howell; great-grandchildren, Kimarri Whitfield, Jace Richardson, Brenlee Richardson, Destinee Jones, Shania Jones, J. J. Jones, and Harvey Howell; a host of nieces and nephews; and special friend, Clayton Dickerson. In addition to his parents, he was preceded in death by his first wife, Hazel Ashcraft Howell; sister, Louise Sims; son-in-law, Jeff Shields; step-mother, Ethel Pierce Howell. A Graveside Funeral Service will be held at 12:00 PM, Saturday, December 5, 2020, in Howell Cemetery, Athens Community, MS, with Bro. Troy Carter officiating. Pallbearers will be Lee and Joseph Lynn Ogletree; Jared Shields; John Mark and Ryan Howell; Zachary and Grant Hawkins; Jack Howell. Donations in lieu of flowers may be made to Riverbend Baptist Church, 50361 Old Hwy 25, Aberdeen, MS 39730,or the Shawna Gray Memorial Scholarship, c/o John David Gray, 60206 Hatley Detroit Road, Amory, MS, 38821, or Sanctuary Hospice, 5159 Main Street, Tupelo, MS 38801. Memories and condolences may be shared with his family at EEPickleFuneralHome.com

The family of Leon Lloyd "Lynn" Howell Jr. created this Life Tributes page to make it easy to share your memories.