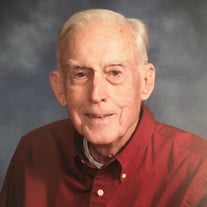 Amory – Lendon Jones, 93, began his new life in Heaven on May 1, 2021. Born on November 30, 1927, in Detroit, Alabama, he was the son of the late John A. Jones and Estella Frederick Jones. He grew up in Hatley, Mississippi and was a graduate of Hatley High School where he loved playing basketball. Lendon was a Patriot, enlisted into the Military where he served in the United States Navy. He was a Machinist Mate, 3rd Class, Petty Officer and he served from July 1948 until September of 1952. Shortly after leaving the Military, he married the love of his life, Afton Kendrick Jones, on April 11, 1953. Together they were blessed with three sons and long happy marriage. He was a provider for his family, he co-owned and operated the Amory Automotive Parts Service Store for 25 years. After leaving the parts business, he worked over 18 years doing abstract title searches for the Carnathan and Malski Firm. Lendon was an honorable man who took care of his wife and children, putting them as well as his country before himself always. A man who loved the Lord, Lendon was a devout Baptist and a longtime member of First Baptist Church in Amory. He loved his church members, who also became family to him over the years. For many years, as a greeter, he was the first smiling face others would see when entering First Baptist. He was also a longtime member of the Rotary International in Amory, where he was a Paul Harris Fellow. He was faithful in attending meetings and supporting the Rotary in any community events. In his younger days, he loved to listen to swing music and do the jitter bug with his sweetheart. He learned how to fly when he was in his mid thirties. Flying always lifted him off this earth and provided him with beautiful views that God had provided. His whole life, he fellowshipped with many coffee drinking groups. With these men, he would occasionally enjoy an off color joke and or just solve all the worlds’ problems. Lendon was always multi-talented, creating things in his wood working shop. His farm gave him great enjoyment, as he liked to be outside working the land. Above all, his family came first and his grandkids and nephews had a special place in his heart. An honorable man, Lendon was loved by so many. The great memories and love he gave will last forever in their hearts. Left behind to treasure his memories, are his wife, Afton Jones; his sons, Kenneth L. Jones (Janet), Johns Creek, GA, Greg Jones, Pickensville, AL, and Dr. Phil Jones, Tupelo, MS; grandchildren, Elijah Braden Jones, Benjamin Michael Jones, and Alexander S. Jones; sister, Onita Jones Sullivan; nephew, Danny Sullivan; niece, Debra Sullivan Saxon; a host of great friends. In addition to his parents, he was preceded in death by his daughter in law, Denise Willis Jones. A Celebration of Life service will be held on Tuesday, May 4, 2021, at 2:30 pm at First Baptist Church in Amory, MS with Dr. Allen Simpson officiating. Burial will follow in Masonic Cemetery in Amory, with pallbearers being Eli Jones, Benjamin Jones, Josh Randle, Jamie Randle, Danny Sullivan, and Lonnie Williams. Honorary pallbearers will be Michael Malski, Steve Randle, Jimmy Forbus, Gene Haney, H. L. Robinson, and Ronnie Boozer. Visitation for family and friends will be held at First Baptist Church in Amory from 1:30 pm until the service hour at the church. The family would like to thank the caring staff at Avonlea Nursing Center for all they have done for their family. Donations in lieu of flowers may be made to First Baptist Church Amory, PO Box 540, Amory, MS 38821. Memories and condolences may be shared with his family at EEPickleFuneralHome.com

The family of Lendon Jones created this Life Tributes page to make it easy to share your memories.

Send flowers to the Jones family.