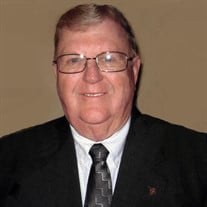 Lee Montgomery Brasfield Amory – Lee Brasfield, 84, met his Savior face to face on Monday, October 19, 2020. Born on August 6, 1936, in Amory, MS, Lee was the son of the late Aubrey and Nell Montgomery Brasfield. Lee grew up in Amory and graduated from Amory High School. He furthered his education at ICC and Mississippi State University. He married the love of his life, Elois Brown Brasfield and they enjoyed over 64 years together. God blessed he and his bride with three sons and a wonderful extended family. A great provider, Lee worked several jobs during his lifetime. He initially started at Cutcliff Drugs of Amory, then worked at Wilson Manufacturing, and finally at Tronox Manufacturing, where he retired from after working thirty years. He had many friends there through the years including Dick Wallman, Bunk Hill, Wayne Pope, Doug Hoots, Bobby Cantrell, Sammie Fields, B.J. Montgomery, Mike Jaudon, and Sam Livingston. He loved the Lord and was a longtime member of Amory First United Methodist Church, having been a member for over 70 years. He served on the Board of Trustees at FUMC, where he was a member as well as a Chairperson. Lee also served on the Finance Committee and the Administrative Counsel at FUMC. He was a man of honor who believed a man’s words was his bond. His faith in the Lord and his love for his family was a daily walking testament to his fine character. In his free time, he was involved with all types of sports. Whether it was participating, watching his children, grandchildren, or great-grandchildren, Lee loved the thrill of the game. He believed in the youth and that they were the future of our country and often he would cheer on the Panthers for whom he was the past President of the Booster Club. Lee was passionate about the Ole Miss Rebels, Atlanta Braves, and the San Diego Padres, especially Mitch Moreland. He liked Blue Grass music, Country, and Bill Gaither Gospel Music. He and his wife’s close friends were Geneva and the late Howard Moon, with whom many adventures and memories were made. Some of his great guy friends were Larry Clark, Al Stephens, and Chad Williams and they often spent time and traveled together. A great guy, Lee was a faithful friend, loving husband, wonderful father and caring grandfather and great-grandfather. He leaves behind a legacy of priceless memories and the gift of an awesome role model for his family. They are forever grateful for all he was in their life and they will miss him dearly until they are reunited again. Left behind to treasure his memories are his bride, Elois, Amory; sons, Ricky Lee Brasfield (Susan), Bradley Gregg (Neita) Brasfield; grandchildren, Mark Whitney Brasfield (Amber Roebuck), Lindsay Brasfield Abney (Buzz), and Taylor Brasfield Stanfield (Austin), Eric and Alicia Wylie; great-grandchildren, James Stuart “Bo” Abney V, Eva Claire Abney, Easton Wylie; niece, Vicki Horne Cunningham and her children, Jay Cunningham and Katy McCurley. In addition to his parents, Aubrey and Nell Brasfield, he was preceded in death by his son, Mark David Brasfield; a sister, Bettiane Brasfield Horne; nephews, J Horne and Gregg Montgomery; in-laws, Clarence and Ruby Brown; and close friend, Howard Moon. A Celebration of Life Funeral Service will be held at 3:00 pm, on Thursday, October 22, 2020, at First United Methodist Church, Amory with Brother Wesley Pepper officiating. Burial will follow in Amory Historical Society Cemetery with the Pallbearers being Al Stephens, Austin Stanfield, Buzz Abney, Chad Williams, Dwayne Brown and Whit Brasfield. Honorary pallbearers will be Larry Clark, Bobby Hall, Bobby Cantrell, and Coach Jerry Lyons. Visitation for family and friends will be on Thursday from 12:30 pm until the service hour at the church in Amory. Donations in lieu of flowers may be made to First United Methodist Church, PO Box 147, Amory, MS 38821 or St. Jude Children’s Research Hospital, 501 St. Jude Place, Memphis, TN. Memories and condolences may be shared with his family at EEPickleFuneralHome.com

The family of Lee Montgomery Brasfield created this Life Tributes page to make it easy to share your memories.

Send flowers to the Brasfield family.