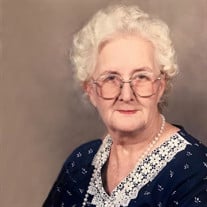 Smithville — Laverne Ritter, 93, passed away on Wednesday, October 17, 2018, at Golden Living Center, Tupelo. Laverne was born in Wren on March 22, 1925 to Robert Bryant Griggs and Degara Gertrude Webb Griggs. Laverne was a woman who put God and her family first in her life. Growing up, she attended Wren School and got her diploma. She worked as a seamstress and was a great mother and provider. Laverne was a member of the Free Will Baptist Church in Amory. She loved being around her family and making memories that would last a lifetime. She was blessed by God with three sons and grandchildren and great grandchildren. She was proud of them and loved them selflessly. Laverne leaves behind with her family a legacy of love and great memories. Laverne is survived by her sons, Anthony Wayne Ritter (Ginger), William Michael Ritter, and Timothy Lynn Ritter (Rhonda); grandchildren, Terri Lynn Ritter, and Amanda Jarvis; great-grandchildren, Breanna Laverne Ritter, Matthew Jarvis and Landon Jarvis; numerous nieces and nephews. In addition to her parents, she was preceded in death by her brothers, J. T. Griggs, Harold “Buck” Griggs, Bryant “Buddy” Griggs; sisters, Laura Worthey, Edith “Sally” Broughman, Delone “Kink” Thompson; grandsons, Jonathan Ritter and Jeremy White; special sister-in-laws, Ruby Griggs and Elizabeth Waycaster. A funeral service will be held at 2 PM Monday, October 22, 2018, at E.E. Pickle Funeral Home with Bro. Dale Ford officiating. Burial will follow in Young Memorial Garden. Pallbearers will include Kendal Waycaster, Keith Waycaster, Rodney Waycaster, Randall Waycaster, and Ricky Griggs. Visitation for family and friends will be held on Monday afternoon from 12:00 pm until 1:50 pm at the funeral home in Amory. Donations in lieu of flowers may be made to the American Cancer Society or Blair Batson Children’s Hospital, Jackson, MS. Memories and condolences may be shared with her family at EEPickleFuneral Home.com.

The family of Laverne Griggs Ritter created this Life Tributes page to make it easy to share your memories.

Send flowers to the Ritter family.