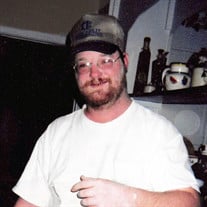 Nettleton—Larry Wayne Presley, 48, passed away on Thursday, July 16, 2020, at his residence in Nettleton. Born in Okolona, Mississippi, on March 8, 1972, he was a son of the late Marion Eugene Presley and Peggy Jo Louis Presley. Larry attended Nettleton and Hatley schools in his younger days, and worked as a painter for many years with Cook and Riley, as well as with his brother’s company, Presley’s Painting. He was known as “Tater” and was truly a one-of-a-kind man. Larry was raised up in the Baptist faith and always kept his faith in the Lord. He relished the outdoors and enjoyed spending many days fishing and hunting. He assisted his brother in deer processing and liked to make venison jerky. Larry taught his daughter, Cheyanne, to fish and loved taking her out for a day of fishing. True happiness for Larry was sitting near the water with his loved ones and catching some good catfish. Larry loved listening to George Jones, Hank Williams, and the other country and western singers. In his free time, you could find him watching Wrestling on the TV, or watching storage wars and the street races in Memphis, Tennessee. He made a friend in every person he met and was well loved by his friends and family. He will be dearly missed. Larry is survived by his wife, Sabrina Gunter Presley; daughter, Cheyanne Presley; stepchildren, Zena Strippling and Shakota Gray; grandchildren, Sadie Jane Gray, Browning Eddie Wayne Gray; sister, Tonya Presley; brother, Joey Dewayne Presley (Kim); and several nieces and nephews. He was preceded in death by his parents and Uncle, Elvis Presley. No services are scheduled at this time. Please share your condolences and memories with his family at eepicklefuneralhome.com

Nettleton&#8212;Larry Wayne Presley, 48, passed away on Thursday, July 16, 2020, at his residence in Nettleton. Born in Okolona, Mississippi, on March 8, 1972, he was a son of the late Marion Eugene Presley and Peggy Jo Louis Presley. Larry... View Obituary & Service Information

The family of Larry Presley created this Life Tributes page to make it easy to share your memories.

Send flowers to the Presley family.