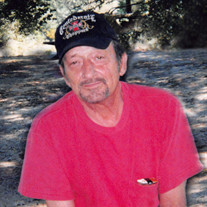 Carolina — Larry Stephen Palmer, 72, passed away on Friday, November 10, 2017 at his residence. Born on April 23, 1945, in the Carolina Community, he was a son of Robert D. and Elner Elizabeth Stanford Palmer. Larry graduated from Itawamba Agricultural High School with the Class of 1965. During his career, he worked as an Insurance Agent. Larry also sold mobile homes. He attended Primitive Baptist Church. Larry’s love for his family and friends guided his life. In his free time, he enjoyed deer hunting and fishing for catfish. Larry loved Ole Miss Football and Country music, especially Willie Nelson and Merle Haggard. One of his favorite pastimes was cooking and grilling for his family. Larry also raised and nurtured a garden full of tomatoes. A very special friend of Larry’s was “Hillbilly” Charles Hill, a buddy that he fished and grilled with. Larry has left a mark in the hearts of everyone who met him. He will be fondly remembered. He is survived by his sisters, Grace Raymond of Amory, Lois Loraine Holley, Carolina Community, Betty “Joyce” Walton, Nettleton; brother, James Albert Palmer, Pocola, OK; and a host of nieces and nephews; special friends, Charles Hill, Tommy Blake, and Brandon Bean. In addition to his parents, he was preceded in death by his brothers, Buddy and Robert; sisters, Mary Lou and Edith; son, Craig; daughter, Tabitha; half-sisters, Lena Barnett, Gladys Blake, Jessie Newton, Edith Anderson; and half-brothers, Blanchard and Odell Palmer. A Celebration of Life Service will be held at 2PM, Monday November 13 at E. E. Pickle Funeral Home, Amory, with Elder Mike Palmer and Elder Bobby Howell officiating. Burial will be in Union Grove Cemetery. Pallbearers will be family and friends. Visitation will be from 5-8 PM, Sunday, at the funeral home. In lieu of flowers, contributions may be made toward Larry’s funeral. Memories and condolences can by shared with his family at EEPickleFuneralHome.com.

Carolina &#8212; Larry Stephen Palmer, 72, passed away on Friday, November 10, 2017 at his residence. Born on April 23, 1945, in the Carolina Community, he was a son of Robert D. and Elner Elizabeth Stanford Palmer. Larry graduated from Itawamba... View Obituary & Service Information

The family of Larry Palmer created this Life Tributes page to make it easy to share your memories.

Send flowers to the Palmer family.