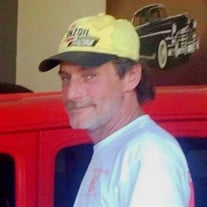 Amory – Kevin Dewayne Ball, 50, passed away on Sunday, March 8, 2020, at North Mississippi Medical Center in Tupelo, MS. Born on June 29, 1969, in Amory, MS, he was a son to the late Lecil and Willene Maxwell Ball. Kevin attended Hatley High School and was a hard-working man. He was employed many places, including Cooper Tire as an electrical contractor an in an around all aspects of the logging industry. A provider and a watchman for his family, he worked hard until his health no longer permitted him. He was blessed by God with a son and two grandchildren he was a loving family man. He was a saved Christian who was a member of Rocky Springs Baptist Church. Kevin loved people and would give the shirt off his back to someone in need. His carpentry skills were amazing and there were not many things Kevin could not do when he set his mind to it. Kevin lived life to the fullest, especially cherishing time with his grandchildren. His family described his personality as ‘wide open like a case pocket knife’ when it came to living life and they said he had a huge heart. In his free time, he loved to be outside riding horses a "find peace of mind" in his words. Some of his favorite music was classic rock, like Lynyrd Skynyrd, and Oldies, as well as Christian Gospel music. He respected and loved his parents and his family have peace knowing that he is reunited with them in heaven. The memories he left behind will be cherished forever by his family and friends. Kevin is survived by his son, Dustin Ball, Aberdeen; grandchildren, Trey and Waylon Ball, Aberdeen; sister, Melissa Rose (Justin), Aberdeen; brother, Chris Ball, Amory, Greg Ball, Amory; his special friend who was like a brother to Kevin, Gary Wouldridge, Amory; and host of nieces and nephews. He was preceded in death by his parents, Lecil and Willene Maxwell Ball. A private family gathering will be held at a later date. Memories and condolences may be shared with his family at eepicklefuneralhome.com

The family of Kevin D Ball created this Life Tributes page to make it easy to share your memories.

Send flowers to the Ball family.