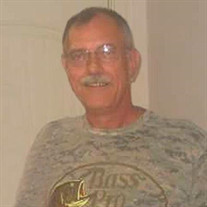 Amory – Kevan Douglas Rye, 61, passed away on Monday, March 19, 2018, at Baptist Hospital, Columbus. Born on March 28, 1956, in Garden City, Michigan, he was a son of the late James Allen “Bozo” Rye. Kevan attended school in Amory and later obtained his GED. Growing up in a large family, Kevan had six brothers and a sister. He worked well with his hands, including working in roofing and general carpentry. Later in life he went into work in the field of Respiratory Therapy in Modesto, California until 2005. Kevan was Presbyterian and he was blessed by God with a full life and experiences. He was especially close to his father, they shared many wonderful times in life together and Kevan soaked in his father’s wisdom. Kevan was a very loving and protective man, He cherished his daughter “Shelley”, they were best friends, and was joyfully proud of his son, Brocton. In his free time, Kevan liked to ride motorcycles, read, help people and spend time with all his brothers. He loved cutting up and laughing with family. He loved listening to classic rock music and country and he appreciated the arts. He enjoyed fishing, visiting the beach, going out to eat and experiencing the city life. His obvious empathy for people was contagious. Kevan was passionate about people of all walks in life, and their struggles. He also cared deeply for the elderly and children. Family was most important to him and he will be missed dearly by all that knew and loved him. He is survived by his daughter, Richelle “Shelley” Rye (Jason Harville), Decatur, AL; son, Brocton James Rye, Berryville, AR; sister, Diane Zichlke McNeal, West Columbia, TX; brothers, Kraig Rye, Amory, Kent Rye, Amory; grandchildren, Ryleigh, Trinity, Gabrial, and Laylan; Brocton James Rye, II; and Michael David Rye; Step-mother, Margaret Rye, Amory; special friends, Michael Lantrip and Diane Jordan; several nieces and nephews. In addition to his parents, he was preceded in death by his brothers, John, Kenny, David, and Keith Rye. A Gathering of Family and Friends will be held at E. E. Pickle Funeral Home on Thursday, March 22, 2018, from 1:30 pm until 3:00 pm. Donations in lieu of flowers may be made to St. Jude Children’s Research Hospital, St. Jude Place, Memphis, TN, 38105. Memories and condolences may be shared with his family at EEPickleFuneralHome.com.

The family of Kevan Douglas Rye created this Life Tributes page to make it easy to share your memories.

Send flowers to the Rye family.