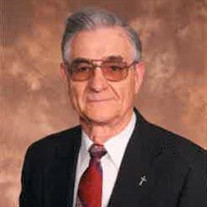 Amory— Earnest Kenneth Adams, 90, entered the heavenly gates on Wednesday, December 12, 2018. He was born in Monroe County on January 15, 1928, to Moman Earnest and Lula Mae Rye Adams. Kenneth was a life-long Monroe County resident. He served in the U.S. Army as a Carpenter General. During his career, he worked for Neely Brothers Construction and was self-employed in water purification. Kenneth worked for the City of Amory in utilities for 42 years. A faithful servant of God, he was ordained as a minister at Faith Baptist Church and spoke to many different congregations in his later years. His faith guided him in his day-to-day life. Kenneth was very involved in the Masonic Lodge and other organizations. He was a Past Master Mason of the J.A. Mayfield Lodge #165; 32nd Degree member of Scottish Rites of Freemasonry in Meridian; and a current member of the Grand York Rite Bodies of Mississippi. He was also a member of the American Legion, Amory Post and a lifelong member of the Order of the Eastern Star, of Amory Chapter 41. Additionally, he was involved in the Amory Commandery No. 36 Knights Templar in Amory. He loved working with Walking Horses and bird dogs and won many awards in horse shows and field trials. Above all, Kenneth loved the Lord and his family, especially his children and grandchildren. He treasured the time he spent with his grandchildren. Kenneth leaves behind many special memories for his family to cherish in the years to come. Kenneth is survived by his son, Kenny Adams (Linda), Hatley; son-in-law, Larry Shelton, Olive Branch; grandchildren, Melissa Adams, Amory, Melanie Dansby (Denton), Albany, LA, Evan Adams (Courtney), Hatley; great-grandchildren, Denny Dansby (Alayna), Mason Dansby, Jared Mims, Charli Kate Adams, Ty Adams, Owen Adams; sisters, Ruby Nell Parham, Hatley, Dorothy Jean Richardson (Dillard), Tupelo; brother-in-law, Earl Dahlem, Pearl; a multitude of nieces and nephews; and very special friends, the staff at River Place Nursing Center. In addition to his parents, he was preceded in death by his wives, Mary Catherine Adams and Mable Colburn; daughter, Mary Angelyn Shelton; granddaughter, Rachon Shelton; and sister, Dimple Dahlem. A funeral service will be held at 3PM on Friday, December 14, 2018 at E.E. Pickle Funeral Home in Amory. Dr. Allen Simpson and Mr. David Highland will lead the service. Burial will follow in Haughton Memorial Park. Pallbearers will be the members of the J.A. Mayfield Lodge #165. Visitation will be from 1PM until the service hour at the funeral home on Friday. In lieu of flowers, donations and memorials may be made to Le Bonheur Children’s Hospital, 848 Adams Ave, Memphis, TN 38103; and Shriner’s Children’s Hospital, 2900 Rocky Drive, Tampa, FL 33607 Memories and condolences may be shared with his family at eepicklefuneralhome.

The family of Kenneth Adams created this Life Tributes page to make it easy to share your memories.