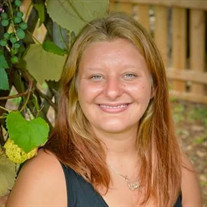 Amory— Kayla “May” Nichole Prestridge, 25, passed away on Friday, October 26, 2018 at NMMC in Tupelo. She was born on December 4, 1992, in Amory, to Bill Prestridge and Debbie Sanders. Kayla attended Amory schools. She was a free spirited girl who lived her life to the fullest and loved everyone she met. A forgiving soul, she always looked for the best in people. She had a huge heart for the people she met and the friendships she treasured. A spunky, energetic, and silly spirit, Kayla had many friends who will miss her dearly. Kayla enjoyed spending time with her family, especially her daughter. She had a special gift with children and had the ability to bond with them. Her daughter, Joie-Laine, brought her much joy in her life. She enjoyed taking kids to swim, to hike on nature trails and to the park on a sunny day. Kayla was also passionate about animals and loved every single one of God’s creatures. In her free time, she liked to sing, paint, and express herself through her words. Kayla was a beloved daughter, sister, mother, and friend. She leaves behind many memories for her loved ones to cherish in the years to come. In addition to her parents, Debbie and Eddie Sanders and Bill Prestridge, Kayla is survived by her daughter, Joie-Laine Thompson; her Godson, Lukas Otts; brothers, Andy “Turtle” Prestridge, Taylor Jones, Sean Southard; grandmother, Wendy Fant (Richard); aunts and uncles, Nell Grant, Pam Sutton, Billy Yarbrough (Amy), Gary Prestridge (Kim), Jimmy Prestridge, Michelle Pearson (Gregg), Crafton Laney (Marla), Truitt Ritter (Christy), Daphne Prestage, Sandy Wheaton (Mike), Richard Sutton, Lana Cook,Tony Ritter (Ginger), Mike Ritter, Tim Ritter (Rhonda), Dray Maxey (Bobby), Mary Louise Chamoun (Terry Stephens), Carol Thomas (Jerry); great-aunts and great-uncles, Cindy Myers, Susan Due, Randy Due (Sharon), Glenda Taylor; many beloved cousins; special friends, Amber Stanford and Ashley Raper; and numerous friends. She was preceded in death by her grandparents, Shirley and Deryle Ritter, Gary “Buddy” Prestridge; and great-grandparents, Homer and Florence Prestridge (“Mom and Pop”), Uncle, Billy Prestage. A funeral service will be held at 2PM Saturday, November 3, 2018 at E.E. Pickle Funeral Home in Amory, with Dr. Tom Cheatham and Bro. Bubba Lollar as the officiates. Burial will follow at Haughton Memorial Park. Pallbearers will be Nathan Sutton, Toby Yarbrough, Jordan Sloan, Lance Willhite, Daniel Prestage, Clay Jones, Brandon Spears, and Jake Pearson. Honorary pallbearers will be Jerry Thomas, Barry Cook, Cody Cook, Tim Roebuck, and Daniel Ritter. Visitation will be from 5-8PM on Friday at the funeral home. Donations may be made to the Amory Humane Society, 1317 Old Hwy 6, Amory, MS 3882; or to Fee Fee’s Fresh Paws (Grooming and Animal Rescue), 30263 Bigbee Cutoff Rd, Amory, MS 38821 Memories and condolences may be shared with the family at eepicklefuneralhome.com

The family of Kayla Prestridge created this Life Tributes page to make it easy to share your memories.

Amory— Kayla “May” Nichole Prestridge, 25, passed away on Friday,...

Send flowers to the Prestridge family.