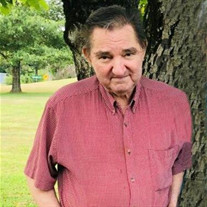 Amory – Joseph Earl Tedford, 78, passed away on Tuesday, January 28, 2020 at North Mississippi Medical Center, Tupelo, MS. He was born on November 12, 1941, in Carbon Hill, Alabama, to the late Donald Gates and Hazel Virginia Pennington Tedford. Earl grew up in Alabama and entered into the Army National Guard in the 60’s. He served in military for six years and during part of his time, he served when Hurricane Camile landed. He started his career as a Photographer and later became a manager and owner of several convenience stores. He was business man his whole life and he finished up his career working as a route salesman for R. C. Cola, Murray’s Snacks, and Jacks. He loved his family and God. He was a member of the Church of God of Prophecy and he enjoyed going to revivals and gospel singing events. His presence will be missed by his family and friends. The memories they shared will live on forever in their hearts. Earl is survived by his daughter, Debra Foster (Bobby), Amory; son, Jason Tedford (Kristina), Amory; grandchildren, Eric Tedford, Rylee Tedford, Cole Redwine, Cameron Shultz, Olivia Shultz, Natalie Shultz, Callie Harrison and Sadie Harrison; Corbin Foster, Levi Foster, Cameron Foster, Marek Foster, Monica Bates, Jessica Willingham, Veronica Prescott; sister, Wanda Goforth; great-grandchildren, Johnathan Allen Tedford, Dakota Wayne Bates, Eli Foster, and Lily Foster; several nieces and nephews. In addition to his parents, he was preceded in death by his wife, Doris Smith Tedford; son, Joseph Wayne Tedford; brothers, David Tedford, J.L. Tedford, and Herbert Tedford. A funeral service will be held at 3PM on Thursday, January 30, 2020 at E.E. Pickle Funeral Home in Amory with Bro. Dean Allen and Bro. Gray officiating. Burial will follow at New Hope Cemetery, Hatley, MS. Visitation will be from 1PM until the service hour at the funeral home in Amory. Memories and condolences may be shared with the family at eepicklefuneralhome.com

The family of Joseph Earl Tedford created this Life Tributes page to make it easy to share your memories.

Send flowers to the Tedford family.