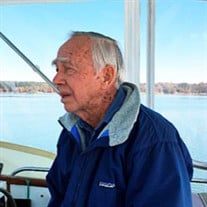 Pickwick Dam, TN - Johnson Crook Kennedy (JC), age 89, passed away on August, 27 2021 at Hardin Medical Center in Savannah, TN. JC was born October 6, 1931 in West Point, MS to Johnson and Trudie Kennedy. He grew up in Hatley, MS, graduating from Amory High School, class of 1950. In his youth, he was very active in the Amory 1st United Methodist Church. He attended Mississippi State University where he graduated in 1954. After graduation, he joined the US Army and served 1954-1957, where he attended flight school and flew non-combat service in the Korean War. After an honorable discharge from the Army in 1957, he went to work for the Federal Aviation Administration as an Air Traffic Controller/Supervisor and retired in 1986. While living in Memphis, he was very active in the St. James United Methodist Church. When he moved to Counce, TN, he attended in the Pickwick Methodist Church. He spent his retirement years participating in the boating community at Pickwick Lake and surrounding areas. He served in the Coast Guard Auxiliary and the US Power Squadron. JC is survived by his son John Charles Kennedy; first cousin, Doug Crook (Thelma); many beloved distant cousins; special friend, Mary Lockhart. He is preceded in death by his mother Trudie Kennedy and father Johnson Kennedy. His graveside funeral will be held on Saturday, September, 4, 2021 at Amory Historical Society Cemetery, Amory, MS. Pallbearers will be John C. Kennedy, Charlie Walker, Jimmy Baker, Tom Crook, Ned Young, and Otis Cowan. Visitation for family and friends will be on Saturday, from 1pm until 3pm at E.E. Pickle Funeral Home. In lieu of flowers, the family requests memorials be made to St. Jude Children's Hospital or Le Bonheur Children's Research Center in Memphis, TN. Memories and condolences may be shared with his family at EEPickleFuneralHome.com.

The family of Johnson Crook "JC" Kennedy created this Life Tributes page to make it easy to share your memories.

Send flowers to the Kennedy family.