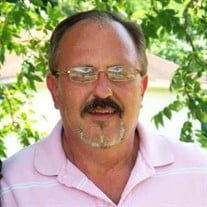 Amory – Johnny F. Gann, Jr., 55, started his new life in Heaven on January 6, 2021. Born on April 23, 1965, in Tupelo, MS, he was a son of the late Johnny Gann, Sr., and Frances Ritter Gann. Johnny grew up in Monroe County and graduated from Amory High School. He furthered his education by later taking courses in Photography at ICC in Fulton. Johnny worked at Krueger International as a Supervisor for several years. During his lifetime, he was blessed by God with four children. He married his loving wife, Wyvonda Jean Hathcock Gann, on July 27, 2014. Johnny’s children, brothers, grandchildren, and extended family meant the world to him. His faith in God and love for his family, guided his life. He loved his church family at Providence Baptist Church and he could often be heard spreading the Gospel to anyone who would listen. Johnny was not afraid to sing the Lord’s praise and he would often sing Gospel solo. At Christmas time, every year for 30 years he played Santa Claus and listened to many children’s wishes. He was supportive of any cause which helped Le Bonheur’s Children Hospital and St. Jude’s Children’s Research Hospital. He was a very outgoing person, who never met a stranger and he could make anyone smile. He liked to pick on people and see if he could get them fall for his jokes. Johnny was passionate about old cars and classic motorcycles. He used to ride his motorcycle with Anthony Daniels and he was a member and past President of The Southern Cruisers. He once converted a 1969 Dodge Charger into a replica of the Duke’s of Hazard car. In his free time, he also liked to build and paint model train cars. Johnny will be missed dearly by his family and friends. Although his time on earth was short, he lived life to the fullest and there is no doubt that he is with his Lord and Savior. He is survived by his wife, Wyvonda Jean Hathcock Gann, Amory; daughters, Courtney Mills (Jamie), Greenwood Springs, Ashley Raper, Amory, Breanna Gann, South Pontotoc; son, Cordell Gann, Amory; step-daughter, Britteny Raditz, Tremont; brother, Michael Harlow (Leigh), Amory; grandchildren, Aliyah Mills, Abbigail Mills, Austyn Mills, Landon Raper, Logan Raper, and Wyatt Raper;; nieces and nephews, Finely Harlow, Alan T. Gann, and Crystal Jones. In addition to his parents, he was preceded in death by his brother, Alan Todd Gann, I. A funeral service will be held on Tuesday, January 12, 2021, at 2:00 pm at Providence Baptist Church in Amory, MS with Bro. Michael Easter officiating. Burial will follow in Masonic Cemetery, Amory, MS. Pallbearers will be Anthony Daniels, Mick Blaylock, Braydon Bynum, Charlie Holloway, Harold Hathcock, and C.J. Hathcock. Honorary pallbearers will be Barry Sims, James Blaylock, Kevin Pannell, Robert Ritter, John Ritter, and Mike Brannon. Visitation for family and friends will be held from 12:00 pm until the service hour at the church in Amory. Memories and condolences may be shared with his family at EEPickleFuneralHome.com.

The family of Johnny F. Gann, Jr. created this Life Tributes page to make it easy to share your memories.