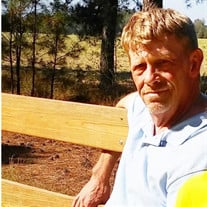 Caledonia—John Henry Funderburk, “Hank,” 46, passed away on Tuesday, October 29, 2019 in Birmingham, AL. Born in Amory, MS on May 23, 1973, he was a son of Ruth Law Funderburk and the late Henry Veto Funderburk. Hank graduated from Hamilton High School and worked as a welder for over 10 years. A rugged, outgoing man, Hank had many treasured friendships and never met a stranger. He was of the Christian faith and strived to help anyone in need. In his free time, he enjoyed the great outdoors, whether it be fishing and hunting, camping with his boys, or taking a boat out on the water. He was a member of the Bass Fisherman’s club and created many memories with his friends in competitions. Hank was a family man and held his family dear to his heart, especially his beloved sons, John Conner and Timmy. He was a kind-hearted friend who always lent an ear and a loving father who will be dearly missed. Hank is survived by his wife, Millie Funderburk, Hamilton; sons, John Conner and Timothy Law Funderburk; mother, Ruth Law Funderburk; sisters, Melissa White (Richard), Caledonia, Felissa Camp (Joe), Greenwood Springs, Sharon Frazier; and a host of nieces and nephews. In addition to his father, Henry, he was preceded in death by his brother, Kenny Funderburk. A Funeral Service will be held at 2:30PM on Monday, November 4, 2019 at Fig Hill Church in Hamilton, MS, with Bro. Joe Camp and Bro. Ricky Hendrix officiating. Burial will be in Fig Hill Cemetery. Pallbearers will include Stacey Guied, Austin Funderburk, J.R. Funderburk, Ken Funderburk, Charles Baggett, Allen Welch, and Max Welch. Visitation for Hank will be from 12:30PM until the service hour at the church in Hamilton. Memories and condolences may be shared with the family at eepicklefuneralhome.com

The family of John Henry "Hank" Funderburk created this Life Tributes page to make it easy to share your memories.

Send flowers to the Funderburk family.