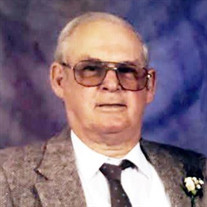 Aberdeen – John Ethaniel Hawkins, 91, finished his earthly course and began a new life in Heaven on Thursday, December 30, 2021. He was born in Wynne Arkansas on November 21, 1930 to the late Charles Hawkins and Genevieve Lunsford Kistler. John “Buddy” grew up as a child in a large family in Arkansas then his family moved to Mississippi. At a young age, he entered in to the United States Navy and served a total of two terms, fighting in the Korean War. Determined to set a good example for his family, later in life he returned to Shannon High School where he obtained his GED. Buddy also obtained his tool and die certificate in trade classes. He worked his entire career at Walker Manufacturing in Aberdeen, where he was the set-up man for their machines. He was a great husband, father and provider. He married the love of his life, Alice M. Dodd, on May 1, 1950 and together they were blessed with over 70 years of marriage and five children who meant the world to him. More than anything, he was a child of God, and his salvation is what he cherished. Buddy made sure to pass this love of Christ onto his children and family. He loved reading his Bible and was a member of Riverbend Baptist Church in Aberdeen, MS where he enjoyed the fellowship of his fellow church members. A funny man, who liked to play jokes on folks, he didn’t always take life too serious. Buddy made many friends during his lifetime, yet one of his closest friends was his dear brother Charles. He liked to listen to Country music and in his free time he enjoyed working in his yard, eating good food, and doing wood work in his shop. Buddy built some amazing bird houses and other creations during his lifetime. By far, the most amazing thing he made was a great home where his family felt his devotion and steadfast love. Buddy’s presence will be missed dearly by his friends and family yet they know he has is with his Savior. They will cherish the memories of him forever. Buddy is survived by his loving wife, Alice Dodd Hawkins, Amory; daughters, Sherry Hawkins Dill (Donald), Aberdeen, Janet Hawkins Wood (Rufus), Aberdeen, and Barbara Hawkins Hood (Andy), Aberdeen; sons, Johnny Dale Hawkins (Debra), Aberdeen, and Noal Hawkins, Wren; nine grandchildren; numerous great-grandchildren; and many great-great-grandchildren; sisters, Flo Poplin, Dandridge, TN, and Martha Reich (Daryl), Nettleton; brothers, Charlie M. Hawkins, Aberdeen, Steve Hawkins (Pam), Aberdeen and Paul David Hawkins, Evergreen Community; a host of nieces and nephews. In addition to his parents, he preceded in death by his son-in-law, Bill Roberts; step-mother, Georgia Mae Roberts Hawkins; three sisters, Betty Lunsford, Nancy Maude Hawkins, and Margaret Hawkins West; two brothers, George Herbert Hawkins, and Clifford Dale Kistler; step-brothers, Earnest Smith and Douglas Smith. A Celebration of Life Service will be held at 2:00:PM, Saturday, January 8; 2022 at Riverbend Baptist Church, Aberdeen, MS, with Bro. Roy McHenry and Bro. Mark Robbins officiating. Burial, with military honors, will follow at Camp Cemetery, Quincy, MS. Pallbearers will be his grandsons. It is requested that if one wishes to make a memorial contribution that it be given to Eight Days of Hope, PO Box 3208, Tupelo, MS 38803. Memories and condolences may be shared with his family at eepicklefuneralhome.com.

Aberdeen &#8211; John Ethaniel Hawkins, 91, finished his earthly course and began a new life in Heaven on Thursday, December 30, 2021. He was born in Wynne Arkansas on November 21, 1930 to the late Charles Hawkins and Genevieve Lunsford Kistler.... View Obituary & Service Information

The family of John E. Hawkins created this Life Tributes page to make it easy to share your memories.

Send flowers to the Hawkins family.