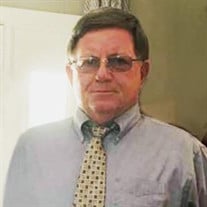 Amory - John V. Cox, of Amory, MS, joined his Heavenly Father on June 4, 2021. John was born at the Gilmore Sanitarium in Amory to Forney Otto and Thelma O' Clay Wright Cox, on Jan. 22, 1951. Currently, the Sanitarium houses the Amory Museum. In 1969, John graduated from Amory High School. While at Amory High School, he was an exceptional running back for four seasons. In fall of 1969, John reported for training camp at Delta State University, on a full football scholarship. John played as a linebacker at Delta State for four seasons, even after suffering a traumatic knee injury. After his senior season, he was named an All-American linebacker at Delta State. In 1973, he graduated from Delta State, on the Dean's list, with a Bachelor's Degree in Business Administration. On July 11, 1971, John and Karen Tabbert Cox were wed. Their marriage was about five weeks short of a 50 year anniversary. After graduating Delta State and returning to Amory, John began a 40 year career in furniture manufacturing at Pullman Couch. During his tenure, he worked with Allied, Townhouse Penthouse, Alan White, and United, where he retired as V.P. of manufacturing. While in the industry, John was known for his innovation and was featured in Furniture Today for his foam alternative for upholstered furniture. Furthermore, John was a member of the J.A. Mayfield Mason's Lodge #165. As a charter member of St. Andrews United Methodist Church, John was a man of faith. Throughout his life he served on the Administrative Board, Finance Committee, as a trustee, and co-taught the Followers of Christ Sunday School class. In all endeavors, John was fiercely competitive and detested failure in the utmost. Commonly, he would call a setback, "Just another way to not finish the job." In his personal life, he loved to hunt big game, especially White-tailed deer, and he hunted in Colorado and Alaska several times. He earnestly desired one more trip to Alaska. Most family members and friends took most of John's recommendations with a grain of salt, as he was routinely pulling off flawless practical jokes, which included one beautiful piece of work on his sister in his final weeks. Until John's final two weeks, he was repairing equipment and vehicles. In his presence, no vehicle was safe, as he was regularly making "special modifications" to make it "do all it could do." To quote one close friend, "He could fix anything but a broken-heart." In his final years, he thoroughly enjoyed watching his oldest grand-daughter play Amory High School volleyball. He was most proud of raising his children, and enjoyed time with his grand-daughters. It has been said that we should not simply strive to make a living, but to make a difference. John successfully accomplished this difficult task. John is survived by his wife, Karen Marie Tabbert Cox; daughter, Heather Marie Wilf (Lann) of Amory; son, John Issac Cox of Amory; sister, Sharon Cox Hathcock (Mike) of Amory; grand-daughters, Kami Marie Wilf and Zaylie Alena Wilf; nieces, Melody Thurlow (Bill) of Starkville, Scarlett Thompson (Kyle) of Amory, Leigh Anne Erikson (Chris) of Amory, Chandler Guice (Griff) of Birmingham, AL, Kelsey Marble (Chris) of Winterpark, FL, and Joshua Tabbert (Christie) of Phil Campbell, AL; and a host of great-nieces and great-nephews. John was preceded in death by his parents Forney Otto and Thelma O' Clay Wright Cox and his infant brother Forney Jr. A Celebration of Life Service will be held on Tuesday, June 8, 2021 at 11:00 a.m., at St. Andrews United Methodist Church, Amory, MS, with Rev. Brian Gordon officiating. Pallbearers will be Chris Erikson, Bill Thurlow, Mason Thurlow, Kyle Thompson, Clay Thompson, and Andy Chauvin. Honorary Pallbearers will be Bill Brayton, Jimmy Dickerson, Jim Dye, James Estes, Larry George, Jimmy Glenn, Bobby Harper, Greg Harris, John Nail, Charlie Owens, Herman Tomlin, Larry Ward, Rusty Wise, Al Wiygul, and the Followers of Christ Sunday School Class. In Lieu of flowers, please send donations to either St. Andrews United Methodist Church, P.O. Box 535, Amory, MS or The Amory Volleyball Boosters, Community Bank, c/o Michelle Hawkins, PO Box 718, Amory, MS, 38821. Memories and condolences may be shared with his family at EEPickleFuneralHome.com.

The family of John Cox created this Life Tributes page to make it easy to share your memories.