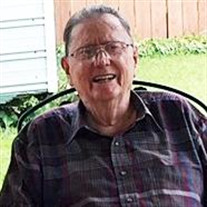 Amory – John A. Carlson, 89, passed away on Sunday, November 19, 2017, at River Place Nursing Center. Born on November 11, 1928, in Paragould, AR, he was the only child of the late Oscar Edwin “O.E. Carl” and Maggie Hathcock Carlson. The family lived in Chicago, IL, and Dallas, TX before settling in Amory in about 1939. After graduating Amory high school, John attended Diesel School in Memphis. The diesel training served as a useful tool as John developed various mechanical and technical skills in building planning, woodworking and machinery. He could build and fix almost anything. Shortly after high school John married the love of his life, Sara Ann Jones. He and Sara, his faithful wife and business partner, had a successful entrepreneurial career, starting with a Drugstore/Soda Shop at the Park Hotel when it opened in 1949. John expanded business ventures to his first grocery store (Carlson’s Market) at Puckett Crossing in 1950. Carlson’s Market transferred to South Main Street in 1955 where John owned and operated the grocery, specialty meat market, and general merchandise business for over 30 years. During his career John invested in rental properties that allowed him to continue to use his wood working and fix-it skills and to offer affordable housing opportunities to new and small families. John and Sara were able to retire 20 years ago and spent their time traveling, gardening, and enjoying friends and neighbors. In retirement, John developed into a brilliant artisan woodworker. He could build anything with his hands. This has been a skill passed through both the Carlson and Hathcock generations. John was a generous and caring man. He was a faithful member of North Boulevard Christian Church, where he served as a Deacon, Board Member, and Sunday School superintendent. He created the plans for the church when it was first built and built the first steeple with a fellow congregant. John was the oldest living charter member of North Boulevard Christian. He was passionate about serving, training and giving to others. He was active in the Meals-On-Wheels program, participating in the high school vocational work study program and supporting individual self-enterprises. John had a servant’s heart and strove to share God’s love and kindness with everyone in his community, especially those in particular need. John made many friends and memories through the years that will last for generations. In his free time, he loved anything outdoors. He was a member of the Civil Air Patrol as a young man, and spent many afternoons piddling on a Ham Radio and later on the CB radios. He enjoyed motor cycles, camping, boating and water travel. He once co-owned and operated Hydrocraft Sales, a boat building business in Amory. John enjoyed listening to Country and quartet Gospel music, watching old movies – and just about anything on television. (He had a TV in every room of the house as well as his workshop.) He was man who had a huge heart. He loved his friends, his church, and his town. He is survived by his wife of 69 years, Sara Jones Carlson, Amory; daughter, Charlotte Carlson, Little Rock, AR; many cousins, nieces and nephews; great-nieces and great-nephews; and special friend, Cindy Myers. He was preceded in death by his parents. His Funeral Service will be held at 3:15PM, Wednesday, November 22, 2017, at E. E. Pickle Funeral Home, Amory, with Bro. Lloyd Minor, Bro. Buzz Wilkinson, and Bro. Tony Stahl officiating. Burial will be in Masonic Cemetery, Amory. Pallbearers will be: Jackie Palmer, Dennis Barnett, Barry Jones, Johnny Frank Turman, Vernon Watson, Bob Hill, Paul Hawkins, and honorary pall bearer, Mike Ausbon. Visitation will be from 1:00 - 2:50PM, Wednesday, at the funeral home. Donations are suggested to go to North Boulevard Christian Church Building Fund, 1201 N. Blvd Drive, Amory, MS. 38821. Memories and condolences can be shared with his family at EEPickleFuneralHome.com.

The family of John A. Carlson created this Life Tributes page to make it easy to share your memories.

Send flowers to the Carlson family.