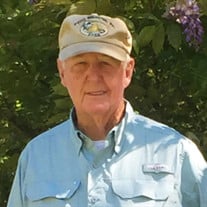 Smithville- Jimmy Young, 79, passed away peacefully on Tuesday, April 7, 2020 at the North Mississippi Medical Center in Tupelo. He was born January 3, 1941, to Cleburn and Idra Lee Williams Young. Mr. Young was a lifelong resident of Smithville, where he attended school and worked for many years at his father’s business, the Smithville Milling Company. Later, he worked at Walker Manufacturing and Yazoo Valley Oil Mill. Jimmy was an avid farmer and enjoyed tending to his cattle. A loving son and brother, Jimmy selflessly cared for his mother after his father’s passing from 1970-2014. Jimmy spent much of his time with Sharla Ruth or “Sister,” as she was affectionately known to him and her husband Harold. They had a special bond and he loved them as only a brother could. A doting uncle, Jimmy was very proud of his nieces and nephews, and loved to spend time with them and their families. Jimmy was a simple man and lived a slower paced life than most.He had no need for cell phones (even though his niece insisted he carry one) or smart televisions. Channels four, nine, and twenty-seven were enough for him. Gardening brought great joy to Jimmy, and so did the “Forty Acres” where he grew enough vegetables for many families. He shared them by leaving bags of tomatoes, squash, cucumbers, and anything else he had grown on a doorknob or in a five gallon bucket on the porch. He was richly blessed with many loyal friends and special neighbors. They are all deeply saddened by his passing, but are left with special memories of him. Survivors include his sister, Sharla Ruth Young West and husband, Harold, of Amory; sister-in-law, Ruth Stevens Young, of Amory; nieces Amy West Johnson (Mark), and Heather West Munn (Jason) of Amory; nephews Cliff Young, Monty Young (Pam) of Smithville; Patrick Young (Latisha) of Becker; numerous beloved great nieces and nephews. He is preceded in death by his parents, Cleburn and Idra Lee Williams Young; his brothers, Doug Young and his twin Jerry Young, and a sister-in-law, Nell Moss Young. Burial was in the Smithville Cemetery. A memorial service for Mr. Young will be held at a later date. Memorials may be made in the form of donations to the Amory Food Pantry, 123 South Main Street, Amory, MS 38821. Memories and condolences may be shared with his family at www.eepicklefuneralhome.com

Smithville- Jimmy Young, 79, passed away peacefully on Tuesday, April 7, 2020 at the North Mississippi Medical Center in Tupelo. He was born January 3, 1941, to Cleburn and Idra Lee Williams Young. Mr. Young was a lifelong resident of... View Obituary & Service Information

The family of Jimmy Young created this Life Tributes page to make it easy to share your memories.

Send flowers to the Young family.