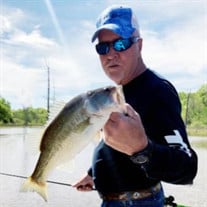 Hatley – Jimmy “Pip” Paul Pipkins, 65, had a sweet reunion with his son and met his Savior face to face on Monday, January 10, 2022. He was born on October 3, 1956, in Sulligent Alabama, to the late Selmer Pipkins and Marie Palmer Pipkins Barder. As a young man, he grew up in family with four other siblings in Alabama where he graduated from Sulligent High School. Jimmy or “Pip”, as others nicknamed him, was a patriot and had an ingrained nature to protect others and put others first. Selfless, he served this great country in the Alabama National Guard for four years. A great provider for his family, he first worked an entire career at Marathon in Vernon, AL, until his retirement. One to never quit, he then went back to work and went into law enforcement, which was certainly his passion and call in life. He was competitive, learned quick, and in no time jumped into a second career in law enforcement, working with the Monroe County Sheriff’s Department. Quickly he became brothers with so many in the law enforcement community and that unspoken bond of trust and support was felt by all in blue who knew and worked with him. He was the guy you wanted covering your back when things got bad. Dependable, welcoming, and a man who was always honest, Pip was a great example of integrity in action. He never met a stranger and always did what he could to work things out for the betterment of all. Pip was a member of the Fraternal Order of Police and he was so proud of the law enforcement community he worked in. His passion was contagious and his love for his fellow brothers will never be forgotten. Monroe County has lost another great officer. Pip was blessed by God, during his lifetime, with a son, Jamie “Pip” Paul, and a loving wife, Julie. Family meant everything to him and they shared many wonderful memories throughout the years. A Christian, he believed in God and when you were around him, you could tell he genuinely cared about others. He attended First Assembly of God Church in Amory and he enjoyed the classic Hymns and Gospel music. His family and friends said that he was a rock, loving, and was always the dependable one. In his free time, he liked to be outdoors, on a boat, fishing anywhere, especially where the bass were biting. He also liked to run, go camping, riding motorcycles, and just working on the yard. When time permitted, he enjoyed spending downtime with his best friend his wife and their fur baby, JuJu. Through the years, he had touched so many lives, always setting a good example of love and service to his community. He will be missed by his family and friends. The memories of him will live on in their hearts. He is survived by his loving wife, Julie, Hatley; sisters, Betty Pipkins Vasquez, and Brenda Pipkins Rhudy; brother, Roger Dale Pipkins; step-son, Trey Parker; niece and nephews, Ann Marie Altobelie Perkins, Joanna Rhudy Gunter, Cody Pipkins, Dustin Pipkins, Heather Pipkins, Adam Pipkins, and Macie Flippo. In addition to his parents, he was preceded in death by his son, Jamie Paul “Pip” Pipkins, and brothers, Bobby Joe Pipkins and Billy Gene. A Celebration of Life Service will be held on Thursday, January 13, 2022 at 3:30 pm at First Assembly of God Church with Sheriff Kevin Crook and Bro. Willie Lockett officiating. Burial will follow in New Hope Cemetery, Hatley, MS with Pallbearers being Steve Hunt, Tim Clark, Ruben Williams, Dustin Pipkins, Jerry Scott, and Tommy Burt. Visitation for family and friends will be held on Thursday, January 13, 2022 from 1:30 pm until the service hour at 3:30 at First Assembly Church in Amory, MS. Memories and condolences may be shared with his family at epicklefuneralhome.com.

The family of Jimmy P. Pipkins created this Life Tributes page to make it easy to share your memories.

Send flowers to the Pipkins family.