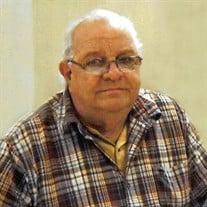 Jimmy Carl Nash Smithville – Jimmy Carl Nash, 76, passed away on August 22, 2017 at North Mississippi Medical Center, Tupelo, Mississippi. Born on December 23, 1940, he was a son of Earlie Mae Carter Nash and Willie Howard Nash Sr. During his career, he worked as a Supervisor for the Maintenance Department at True Temper Manufacturing Company. He retired after working over thirty years. Jimmy married the love of his life, Jerri Branham Nash on July 1, 1960 and together they were blessed with three sons. Jimmy was a faithful member of Smithville Baptist Church and he loved the Lord. God and family meant the most to him and it showed through his deeds and love he showed to them. His family would tell you he was a great father and husband. Jimmy enjoyed watching his children grow, have families of their own, and lead exemplary Christian lives. Jimmy had numerous close friends and he enjoyed always doing something like playing cards or some sort of sport. He liked to golf and was an active member of the Amory Golf Club and he was a member of Bass Masters Fishing Club. Besides fishing, he loved to hunt and was a member of the James Creek Hunting Club. Jimmy was also a craftsman who especially enjoyed carving wood. The wonderful memories he gave his friends and family will live on in their hearts forever. Survivors include wife of 57 years, Jerri Branham Nash, Smithville; sons, Bert Nash(Debbie), Smithville, Randy Nash (Angela), Columbus, Justin Nash (Carrie), Sheffield, AL; sister, Barbara Nell Roberts (Winford), Hatley; brother, Howard Nash Jr. (Sue), Hatley; grandchildren, Alex and Caitlin Nash; Christame Nash; Jera Nash; Kendi Hitt (Josh); Rusty Burroughs (Heather); great-grandchildren, Liam Nash; Dayton and Lakelyn Hitt; Daine Ramey; Savannah, Ali and Sierra Burroughs; a host of nieces and nephews. In addition to his parents, he was preceded in death by his sister, Ruby Suggs. A Celebration of Life service will be held on Friday, August 25, at 11AM at Smithville Baptist Church, Smithville, MS with Bro Wes White officiating. Burial will be in Hatley Cemetery. Pallbearers will be Josh Hitt, Rusty Burroughs, Teddy Nash, Tony Nash, Buddy Suggs, Danny Worthy. Visitation will be from 5PM-8PM on Thursday, August 24, 2017 at Smithville Baptist Church, Smithville, MS. In lieu of flowers, donations may be made to Smithville Baptist Church, 63388 Highway 25 North, Smithville, MS 38821. Memories and condolences may be shared with his family at EEPickleFuneralHome.com

The family of Jimmy C. Nash created this Life Tributes page to make it easy to share your memories.

Send flowers to the Nash family.