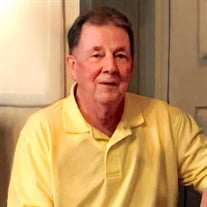 Amory - Jimmy Lynn Davidson, 70, passed away Friday, June 22, surrounded by his loved ones at home. Born on March 14, 1948 in Thorn, Mississippi, he was a son of John “Jack” Thomas and Rosa Lee Nolan Davidson. Jimmy graduated from Houlka High School with the Class of 1966. Shortly after, he departed to serve in the U.S. Army in the Vietnam War from 1967 to 1969. A live weapons infantry soldier, he operated a 50 Cal Sherman Tank. Jimmy received a Bronze Star for his service. During his career, he was a truck driver for VF Wrangler. As a child, Jimmy was baptized at Prospect Baptist Church. He later became a faithful member of Schooner Valley Baptist. Jimmy was a life-long fan of the Boston Celtics. He also enjoyed watching Mississippi State Athletics. In his free time, he was an avid reader. Two of his favorite authors included John Grisham and James Patterson. He greatly enjoyed listening to Elvis Presley, as well country music. Jimmy’s fondest memories, however, were Christmas holidays with his family. His wife, children, grandkids, and great-grandson brought him joy and peace in his life. Jimmy leaves behind a lifetime of memories for his family to cherish in the years to come. Although he will be missed, his family rejoices that he is now in his heavenly home. Jimmy is survived by his wife, JoeAnn Farley Davidson; daughter, Nikki Pearson (Jeff), Amory; son, Jimmy Lynn Davidson Jr. (Amanda), Quincy; grandchildren, Seth King, Josh Pearson, Gavin Walls, Ashlynn Davidson, Sydney Pearson, Carleigh Davidson; great-grandchild, Greyson King; brother, Stewart Davidson (Marr), Tupelo; and a host of nieces and nephews. In addition to his parents, he was preceded in death by his brothers, Shed and Donald Davidson; sister, Peggy Davis; and nephew, Terry Davidson. A funeral service will be held at 11 AM Monday, June 25, 2018, at E.E. Pickle Funeral Home, with Bro. Stanley Blaylock and Bro. Dennis Smithey officiating. Burial will follow at Poplar Springs Cemetery in Calhoun County. Pallbearers will be Seth King, Gavin Walls, Jason Tutor, Billy Black, Jeff Pearson, Josh Pearson, Willie Locket, and Tim Pearson. Willie McVay will serve as an honorary pallbearer. Visitation will be at the funeral home on Sunday, June 24, from 5PM-8PM. In lieu of flowers, donations may be made to the American Cancer Society, P.O. Box 22478, Oklahoma City, OK 73123. Memories and condolences may be shared with the family at eepicklefuneralhome.com

Amory - Jimmy Lynn Davidson, 70, passed away Friday, June 22, surrounded by his loved ones at home. Born on March 14, 1948 in Thorn, Mississippi, he was a son of John &#8220;Jack&#8221; Thomas and Rosa Lee Nolan Davidson. Jimmy graduated from... View Obituary & Service Information

The family of Jimmy Lynn Davidson created this Life Tributes page to make it easy to share your memories.

Send flowers to the Davidson family.