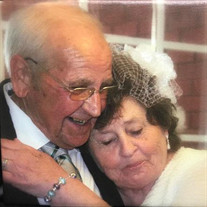 Bro. Jesse Roger Allen Amory — Bro. Jesse Roger Allen, 85, crossed over to his heavenly home into the arms of his Savior on April 28, 2019. He was born on January 21, 1934 in Beaverton, Alabama to the late Henry Allen and Anita Mangram Allen. Growing up, Bro. Roger attended High School in Vernon, Alabama. He furthered his education at Delta State. He worked as a Supervisor at Douglas plant in Cleveland, MS and he also worked at D & L Industries for 7 years. He was an entrepreneur and if he thought of something, he could make it. He even designed a part while at work that fixed a manufacturing line breakdown. He met the love of his life, Dorothy “Dot” on a date at Mullins Well and on July 23, 1955 they were married. They were blessed with 62 years of marriage and they were blessed by God with four children. With a tug on his heart by the Lord, Bro Roger eventually quit work and began a full time ministry career. He was a Pastor for 40 years with the Church of God of Prophecy. After he retired, he became a member of the Amory Church of God of Prophecy. He was a patient, wise and loving man who was often the rock of the family. He was full of the Spirit and was passionate about preaching the Gospel. His family sang Gospel music together and he let God lead him in his daily walk. Bro. Roger was a great example to his family and friends of what the love of God should look like in everyday life. He loved to read his Bible and he loved his family dearly. He loved his family and wanted to spend all the time he could with them. He strived to make someone smile and be an inspiration to all. The memories he leaves behind will be cherished forever by his family and loved ones. His family takes comfort in knowing that he is in his heavenly home. Bro. Roger is survived by the love of his life, wife of 62 years, Dorothy Allen; daughters, Teresa Wooten (Donnie), Lesia Rea (Kevin); sons, Jesse Allen (Cindy), James Allen (Tammy); 14 grandchildren; 18 great-grandchildren; 6 great-great grandchildren; brother, Troy Allen; sisters, Olean, Juanita, and Henrietta. In addition to his parents, Bro. Roger was preceded in death by his brothers, Bill, Coy, Roy and Ray Allen; sister, Lunell Allen Hood. His Celebration of Life Service will be held at 11 AM, Thursday, May 2 at E.E. Pickle Funeral Home, Amory, with Bro. Dean Allen. Burial will follow in McDuffie Cemetery. Pallbearers will be Roger Wooten, Mitch Allen, Chance Rea, Brandon Rea, Stephem Embrey, and Jose Rosales. Honorary Pallbearers will be Isaac Wooten and a friend Ken. Visitation will be from 5-8PM, Wednesday night at the funeral home in Amory, MS. Memories and condolences may be shared with his family at EEPickleFuneralHome.com.

Bro. Jesse Roger Allen Amory &#8212; Bro. Jesse Roger Allen, 85, crossed over to his heavenly home into the arms of his Savior on April 28, 2019. He was born on January 21, 1934 in Beaverton, Alabama to the late Henry Allen and Anita Mangram... View Obituary & Service Information

The family of Bro. Jesse Roger Allen created this Life Tributes page to make it easy to share your memories.

Send flowers to the Allen family.