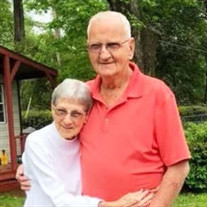 Amory – Jerry Lantrip, 87, met his Savior face to face on Wednesday, January 13, 2021. Born in Amory, MS on May 30, 1933, he was a son of the late Jake and Dolly Milam Lantrip. Jerry attended Amory High School and entered into the Mississippi Army National Guard in 1951 where he served as a Specialist 4. In 1953, he met the love of his life, Betty McCauley. They were married on February 4, 1955. Over the next six years, they were blessed by God with two children, Mark and Lisa. They would have celebrated 67 years of marriage on February 4. Starting in 1954, Jerry worked on the railroad, moving to several states during his career. He worked and lived in Sherman, TX, and Forsyth Montana. In 1997, he moved back to Amory to be home with family. He worked a total of 42 years on BNSF, where some of his jobs included Brakeman, Conductor, Engineer, Road Foreman, and Train Master. He retired in 1996. During his career, he traveled to many states and met people from all walks of life. Jerry had great stories to tell about his life’s travels. Those experiences helped shape the man he was. Jerry was of the Baptist faith and he loved God who had many times carried him throughout life’s struggles. He was a member of First Baptist Church in Amory, MS. Jerry was always willing to help anyone in need and never met a stranger. His family and wife meant the world to him. He loved taking care of his best friend and wife, Betty. In his free time, he enjoyed flying planes! Luke Inzer helped him achieve his goal of becoming a licensed pilot. He loved the feeling of freedom when lifting off the earth’s surface. Up there, the world was below and he gained a completely different perspective of life. When on the ground, his yard and home were his passions. Jerry was a very detailed and determined man. Jerry loved to listen to old school gospel and country music while spending time with his wife, Betty. Jerry’s legacy of love and friendship will live on the hearts of the people who loved him. He will be dearly missed. He is survived by his wife, Betty Jo McCauley Lantrip, Amory; son, Mark Lantrip, TX; sister, Katherine Overbay, IN; a host of nieces and nephews; special friends, Jackie Palmer and Jerry Sanders. In addition to his parents, he was preceded in death by his daughter, Lisa Lantrip Warren; brothers, Phillip Lantrip and Jimmy Lantrip. Visitation for family and friends will be held at the funeral home on Sunday from 12:30 pm until 2:00 pm. A funeral service will be held on Sunday, January 17, 2021, at E. E. Pickle Funeral Home in Amory, MS with Dr. Allen Simpson and Mr. Michael Simpson officiating. Burial will follow in Haughton Memorial Park in Amory. The pallbearers will be Joe Hughes, Larry Palmer, Hal Holloway, Paul Hawkins, Paul Hawkins, Jr., and Ray Warren. Honorary pallbearers will be Dwight Johnson, Jackie Palmer, and Jerry Sanders. Memorials may be made to Sanctuary Hospice House in Tupelo, MS. Memories and condolences may be shared with his family at EEPickleFuneralHome.com.

The family of Jerry Lantrip created this Life Tributes page to make it easy to share your memories.

Send flowers to the Lantrip family.