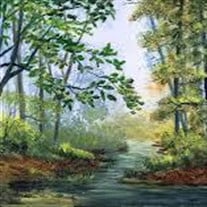 Wren—Jerry Leon Jenkins, 71, stepped into Glory on Wednesday, April 1, 2020. He was born in Amory, Mississippi on September 23, 1948 to Kenneth Alvin and Earline Sizemore Jenkins. Jerry obtained his education while serving in the United States Army. During his 6 years of duty to this nation, he served in South Korea for 3 years. Jerry attended Wren Presbyterian and was also a previous member of Eggville Free Will Baptist Church. He was a volunteer fireman for Wren Fire Department, where he also served as a volunteer fire chief. Jerry began working at Pullman Couch for several years. He retired from Styleline Furniture at age 65 as a cutting and sewing supervisor. Jerry also enjoyed coaching summer baseball. Jerry was a strong-willed and determined individual with a servant’s heart to his community. He could always be found woodworking in his shop or working in the yard. He enjoyed fishing, hunting, and going to the casino. Jerry loved debating the Bible and teaching the Word of God to his family and friends. He was an avid Ole Miss Football fan and would claim that he bled red and blue for his Rebels. In his free time, Jerry enjoyed listening to country and gospel music and mowing yards. Jerry also liked watching Gunsmoke, Little House on the Prairie, and the Cooking Channel and he loved some good home-cooked soul food. Above all, Jerry adored his family and took great pride in listening to his grandchildren sing in church. Faith in God and his family were the most important things in Jerry’s life. He was a dedicated family man who will be dearly missed by his loved ones. Jerry is survived by his daughters, Stacey R. Hatcher (Jamie), of Okolona, Amanda L. Ausborn (Tony); grandchildren, Kortney Harper (Chuck), Kristofer, Bryana, Reggie, Lekeythia; great-grandchildren, Wyatt, Noelle, Peyton, Kaiden, Elijah; sister, Shirley Fuller; brothers, Delbert Jenkins, Pete Jenkins; several nieces and nephews; special loving friend, Linda Jenkins; and friend, Bonnie Jenkins. In addition to his parents, he was preceded in death by his brothers, Nicky and Herbert Jenkins. A private family graveside will be held in New Hope Cemetery in Aberdeen, with Bro. Greg Huguley officiating. Honorary pallbearers will include David Jenkins, Korey Jenkins, Rodney Guyton, Steve Jenkins, Brandon Jenkins, Ricky Harris, and Bryan Jenkins. No public visitation will be held. Memories and condolences may be shared with the family at eepicklefuneralhome.com

Wren&#8212;Jerry Leon Jenkins, 71, stepped into Glory on Wednesday, April 1, 2020. He was born in Amory, Mississippi on September 23, 1948 to Kenneth Alvin and Earline Sizemore Jenkins. Jerry obtained his education while serving in the United... View Obituary & Service Information

The family of Jerry Jenkins created this Life Tributes page to make it easy to share your memories.

Send flowers to the Jenkins family.