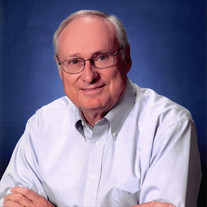 Amory— Jerry Willard Carter, 72, passed away on Monday, January 15, 2018, in Tupelo. Born on December 24, 1945, in Amory, he was a son of the late Ollie Willard and Ethelene Sullivan Carter. Jerry graduated from Hatley High School with the Class of 1964. He then attended Itawamba Junior College. Jerry met the love of his life, Carolyn, and they married on April 15, 1967. He served with the Army National Guard for 7 years and spent 6 months at Basic at Ft. Polk. During his career, he worked as a realtor and supervisor. Jerry worked for Tronox and Walker before operating as a supervisor for True Temper for 20 years. He also worked in Real Estate with Francis/Wilkerson for 41 years. Jerry was a man of God. He loved to be a servant to God and witness to people. Jerry was a greeter and usher at First Baptist Church, where he was a faithful member. He served at the Mission Center on Tuesdays and worked with the building committee. A true socialite, he enjoyed drinking coffee at McDonald’s with the church folks. Faith and family were two important factors of Jerry’s life. He loved getting together and having meals with his family, as well as going on family vacations. In his free time, he enjoyed working on old cars and watching his grandkids play ball. He listened to gospel and country music. Many people described Jerry as a loving and caring provider for his family. He was quick on his feet and known for his wit. Jerry has left a lifetime of memories to be cherished by his family. His family takes comfort in knowing that Jerry is now rejoicing in heaven. He will be dearly missed. Jerry is survived by his wife, Carolyn Palmer Carter, Amory; daughter, Kim Carter Holloway (Scott), Amory; son, David Carter (Jeanie), Amory; grandchildren, Katie Carter, Ben Carter, Cody Holloway; brother-in-law, Steve Palmer; great-grandchild, Kasyn Holloway; several nieces and nephews; and special cousin, Billie O’Brien. Along with his parents, Jerry was preceded in death by his brother, John K. Carter. His funeral service will be held on Friday, January 19, 2018, at 2PM at E.E. Pickle Funeral Home, Amory. Dr. Allen Simpson and Bro. Jimmy McFatter will be officiating the service. Pallbearers will be Randy Hill, Scotty Carter, Billy Carter, Hal Bourland, Sam Cornpropst, Kenny Hill, and Travis Murray. Honorary pallbearers will be the Step-by-Step Sunday School Class of FBC. Burial will follow at Haughton Memorial Park, Amory. Visitation for Jerry will be from 5-8PM on Thursday, January 18, 2018, at the funeral home. In lieu of flowers, memorials and donations may be made to First Friends Respite Center, First Baptist Church, 303 1st Ave, Amory Mississippi, 38821. Memories and Condolences may be shared with the family at eepicklefuneralhome.com

Amory&#8212; Jerry Willard Carter, 72, passed away on Monday, January 15, 2018, in Tupelo. Born on December 24, 1945, in Amory, he was a son of the late Ollie Willard and Ethelene Sullivan Carter. Jerry graduated from Hatley High School with... View Obituary & Service Information

The family of Jerry W. Carter created this Life Tributes page to make it easy to share your memories.

Send flowers to the Carter family.