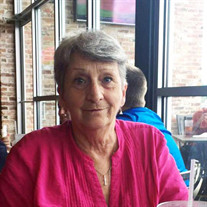 Fulton-- Jennie McCollum Johnson, 67, passed away on Saturday, July 6, 2019, at Sanctuary Hospice in Tupelo. She was born in Nettleton on August 19, 1951 to James and Mary Sue McCollum. Jennie was a spitfire go-getter with a heart for children. She was a loving mother, a doting grandmother, and a devoted wife. Jennie had a passion for foster children and exchange students, and each child that came into her life offered blessings and fond memories that she cherished. Jennie’s first priority was the health and well-being of her children and grandchildren. Her family was the cornerstone of her life. In her free time, she loved going to the casino with her steadfast partner, Ralph, and spending time with her grandchildren. She would go to any lengths for the happiness of her family. Above all, her unwavering faith in the Lord kept her strength through even her darkest days. To know Jennie was to love her. She leaves behind a whirlwind of memories that will never be forgotten by her loved ones and friends. Jennie is survived by her loving husband, Ralph Johnson, Fulton; daughters, Michelle Stanford Camp, Amory, Sherri Lasae Johnson, Tupelo; sons, Rodney Stanford, Nettleton, Bruce Johnson (Tiffany), Fulton; grandchildren, Paige Stanford, Bryce Camp, Bryn Camp, McKynlie Camp, Chad Brahl, Ashton Johnson, Anderson Johnson, Aiden Wright, Sarina Ashley; brothers, Gerry McCollum, Wren, Mike McCollum, Fulton; and special friends, Teresa Davis, Monica Summers, Sabrina Ashley, Taylor Turner, Christina Römer, and all of the exchange students and foster children that blessed her life over the years. In addition to her parents and grandparents, she was preceded in death by her brothers, John Robert McCollum and Tommy Wayne McCollum. A Celebration of Life Service will be held at 3PM on Monday, July 8, 2019 at E.E. Pickle Funeral Home in Amory, with Bro. Stanley Blaylock officiating. Jennie’s grandsons will serve as honorary pallbearers: Bryce, Bryn, Chad, Ashton, Anderson, and Aiden. Visitation will be from 1PM until the service hour at the funeral home on Monday. Memories and condolences may be shared with the family at eepicklefuneralhome.com

Fulton-- Jennie McCollum Johnson, 67, passed away on Saturday, July 6, 2019, at Sanctuary Hospice in Tupelo. She was born in Nettleton on August 19, 1951 to James and Mary Sue McCollum. Jennie was a spitfire go-getter with a heart for children.... View Obituary & Service Information

The family of Jennie Johnson created this Life Tributes page to make it easy to share your memories.