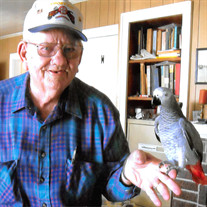 Jasper “Jack” Cooper Cantrell, 93, passed away on September 28, 2017, surrounded by his family at his residence. Born on May 30, 1924, in Monroe County, MS, he was the son of the late Cooper Hodges and Theola Wiygul Cantrell. . Jack loved the Lord and was a long time member of First Baptist Church, Amory. After graduating from Becker High School in 1942, Jack honorably served in the US Navy during World War II from 1943 – 1946. On July 9, 1947, Jack married the love-of-his-life, Betty Jean Brown, and they were married for 64 years before God called her home. They were blessed with two sons, who both reside on the family farm that was homestead in the early 1800s by the Cantrell Family Soon after Jack and Betty married, he began driving a truck for Dalrymple Equipment. Then in 1955, he was hired as a Fireman for Frisco Railway. He had a love for the railroad and worked there for 30 years, retiring as an Engineer with Burlington Northern in 1985. Staying busy following retirement, Jack & Betty traveled the country with their friends Bob and Francis McNeese visiting more than half of the 50 states. When at home he farmed the family land and loved being outdoors on the farm; it was his pride and joy. Having a love for animals, he raised Boston Terrier puppies for many years after retirement. In 2005, he and Betty purchased Charlie, an African Grey Parrot, who became his “best buddy.” Little did Jack know, but Charlie would be what kept him going after Betty passed in 2011. Jack and Charlie became famous when an article, written by Emily Tubb, appeared in the county magazine. The article told the stories of conversations between Jack and Charlie, and how Jack had taught Charlie over 500 words; including his phone number. Jack truly loved his family, especially his 9 great-grandchildren and was affectionately known as “Poppa Jack”. He was famous in Monroe County and beyond for his family’s secret recipe BBQ sauce. Jack loved to fish and deer hunt throughout his entire life, and shared that love with his sons and granddaughters. A Mason and a Shriner, he recently received his 70-year Masonic pin and was the oldest Shriner in the State of Mississippi. He served as the President of the Quincy Water Association, and was on the board for 43 years. In his later years, Jack enjoyed Wednesday’s playing poker with some of his closest friends. One who lived-life-to-the-fullest, he was always a happy man. Jack leaves behind a legacy of great memories and cherished times together. He will never be forgotten. Jack is survived by his sons, Jerry C. Cantrell (Jenny) and Jimmy H. Cantrell (Norma) all of Amory; grandchildren, Carol Knight (Josh), Ashley Springfield (Kevin) and Casey Cantrell; great-grandchildren, Addison and Silas Knight; Kylie Harbin; Cameron and Kenleigh Hadaway; Connor, Cody, Abbi Lee, and Alli Cooper Springfield; sister-in-law, Katherine King; nephews, Johnny and Tommy King; niece, Julie Jett. In addition to his parents, he was preceded in death by his wife, Betty; brother-in-law, W. C. King; father-and-mother-in-law, Thomas Greely and Winnie Palmer Brown. His family would like to extend a very special thank you to Cindy Myrick, Andrea Pyron, Lynndon Crommeans, Christy Lann, The Staff of Halcyon Hospice, Dr. Steven Hathcock, Dr. Roy Thomas, Dr. Lucas McElwain, and the staff of NMMC, Tupelo. His Funeral Service will be held at 2 PM, Monday, October 2 at First Baptist Church, Amory, with Dr. Allen Simpson, Bro. Coy Hill and Bro. Justin Simmons officiating. Burial will follow in Durrett Cemetery in Quincy. Pallbearers will be Gregg Moore, David Moore, Coley Hadaway, Terry Burks, Johnny King, Jacky Palmer, Wayne Faulkner, Robert Dykes, Van Hilt, and Tommy King. Honorary pallbearers will be Employees of Quincy Water Association; Masons and Shriners; Employees and Retirees of BNSF. Visitation will be from 5-8 PM, Sunday at E. E. Pickle Funeral Home, Amory. Jack will lie-in-state at the church from 1 PM until the service hour on Monday. Donations may be made to the Office of Development, Shriners Hospitals for Children, 2900 Rocky Point Dr., Tampa, FL 33607. Memories and condolences may be shared with his family at EEPickleFuneralHome.com.

The family of Jasper C. "Jack" Cantrell created this Life Tributes page to make it easy to share your memories.

Send flowers to the Cantrell family.