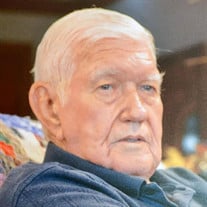 Smithville – James A. “Buddy” Sullivan, 84, began his new life in Heaven on Monday, April 26, 2021. He was born in Smithville, MS, on May 18, 1936, to the late Carlos Edgar Sullivan and Ovie Holloway Sullivan. Buddy grew up in Monroe County and in a large family surrounded by his 7 sisters. He attended Smithville Schools and began work early. He made a career working at C & D Lumber in Amory, Mississippi. For over 40 years, he worked there, served the public, and helped build homes in the surrounding community. He enjoyed being outside, building anything, and he never met a stranger while working on the job. Buddy had a strong faith in God and he was a member of Pearce Chapel Church, where he was a trustee for many years. He took great pride in God’s church and helped mow the grounds for many years. During his lifetime, he was blessed by God with a loving wife, Madie Faye, with whom he had a daughter. After Madie passed away, he married Jackie Sullivan. He was a great father, grandfather, and provider for his family. He looked forward to going to church, where he would fellowship with his church family, and listen to Gospel music. A farmer, Buddy enjoyed growing vegetables and operating his tractor as he worked the land. In his free time, he liked to find treasures and bargain for them so that it became a rare find. He liked to hang out with his buddies, Jimmy Cowley, Billy Cox, Jimmy Ritter, Ricky Robinson, Charles Watson, and his four legged pal, Dixie. When he wasn’t able to be outside or with friends, Buddy liked to get caught up in a good western show on TV. Above all, his faith and family were the most important things to him in his life. A true friend and great father, Buddy will be missed dearly by all that knew and loved him. They know that he is surrounded by the beautiful love and light of God. Buddy is survived by his daughter, Darnell Collums (Phillip), Smithville; granddaughter, Camille Collums (Heather Noe), Smithville; sister, Laura Jean Wheeler, Fulton; special nephew, Tony Poss; wife, Jackie Sullivan; several nieces and nephews; and too many friends to list them all. In addition to his parents, he was preceded in death by his wife, Madie Faye Francis Sullivan; sisters, Reba Turner, Opalean Murphy, Vernie Sullivan, Eloise Lindsay, Hazel Noe, and Mildred Culverhouse. His graveside funeral service will be held on Thursday, April 29, 2021, at 10:30 am, at Pearce Chapel Cemetery, Smithville, MS with Bro. John Johnson officiating. Burial will follow and his pallbearers will be his nephews. His honorary pallbearer will be Tony Poss. Visitation for family and friends will be held on Thursday, April 29, 2021 from 9:30 am until 10:15 at the Smithville Chapel of E. E. Pickle Funeral Home. Donations in lieu of flowers may be made to the Pearce Chapel Cemetery Fund, c/o Patricia Horne, 60146 Hadaway Bottom Road, Smithville, MS 38870. Memories and condolences may be shared with his family at EEPickleFuneralHome.com

The family of James A. "Buddy" Sullivan created this Life Tributes page to make it easy to share your memories.

Send flowers to the Sullivan family.