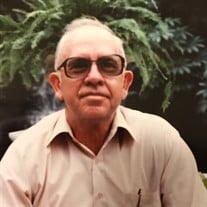 Amory – James Oliver Poore, 91, passed away on Sunday, June 11, 2017, at The Meadows, Fulton. Born on September 12, 1925, in Detroit, AL, he was a son of the late Walter Alonzo and Molly Hawkins Poore. Oliver grew up in Alabama, where he would proudly tell you about his playing on the winning State Championship basketball team in the eighth grade. When he became of age, he joined the Army and is a Veteran of World War II. His first occupation was at Mutt’s Grocery, and he also worked at Cowden’s Cleaners and Hood’s Cleaners before retirement. He expressed his keenness for sports and loved to greet people with a “Roll Tide” in honor of his love for Alabama football. He also took the time to visit folks who were sick and not able to get out much. He was known for his sweet spirit and often described as a gentle man who was always willing to help anyone. His servant attitude will carry on in the hearts of his family and friends. Oliver, a strong man of faith, served as a Deacon at Hatley Primitive Baptist Church. Along with his relationship with God, he also believed in the importance of caring for his family. He spent much of his time in his vegetable garden, where he would grow the produce and his wife would harvest. He loved being outside in his garden as much as his love for the 40’s Big Band music. He is survived by his daughter, Norma Cother, Tupelo; grandchildren, Justin Cother (Maurie), Pontotoc; Jason Cother, Austin, TX; and great-grandchildren Waylon, Weston, and Charlie Cother. In addition to his parents, he was preceded in death by his wife, Weynona Mae Stone Poore. His Graveside Service will be at 2:15 PM, Sunday, June 18 in Hatley Cemetery with Elder Tim Cunningham officiating. Pallbearers will be family and friends. Visitation will be from 1 – 2 PM, Sunday, at the funeral home. Memorials may be given to Hatley Primitive Baptist Church, 60267 Hatley Rd, Amory, MS 38821. Memories and condolences may be shared with his family at EEPickleFuneralHome.com.

The family of James Oliver Poore created this Life Tributes page to make it easy to share your memories.

Send flowers to the Poore family.