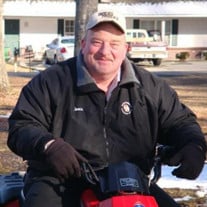 Jamie Coker Amory – James “Jamie” Bruce Coker, 55, met his Savior face to face on Sunday, April 4, 2021. Born on February 11, 1966, he was a son of Francis Jernigan Coker and the late Connie Reed Coker. Jamie grew up in Monroe County and attended Smithville High School where he was active in the Future Farmers of America Club. He was a hard worker, working many jobs during his lifetime in order to provide for his family. Before retiring, he worked in the transportation industry for Old Dominion as a truck driver for many years. He really loved driving a truck and he received many safety awards for his safe driving record during his career. Jamie married the love of his life, Katherine Stacy Coker on March 12, 1983 and they were blessed with three children. He was a good provider, a family man, and a great father. He loved the Lord and he worshipped at Freedom Baptist Church. He was loving, a big teddy bear and a jokester who like to aggravate others for a smile. Jamie was a morning person, who enjoyed working in his garden and mowing his yard perfectly. Anything with wheels that moved outside he enjoyed, especially tractors. Some of his close friends were Rick Adams, Jerome Casey and Mike Walden but his best friend was his four legged buddy “Sophie”. He was the life of the party, liked to entertain and was a great cook who specialized in homemade pizzas and spaghetti. His big smile and presence will be missed by so many and his family is thankful for the memories of good times with him. His survivors include his wife, Katherine Coker “Denni”, Amory; daughters, Jennifer Rene Gray (John), Amory, Katherine “Katie” Lauren Bryan (Dusty), Amory; son, James Eric Coker (Treycee), Quincy Athens Community; mother, Francis Jernigan Coker, Smithville; grandchildren, Baylee Cresap, Jon David Coker, Abby Gray, Charley Gray, Carson Pennington, and Kayelen Pennington; sister, Joyce McGuire (Billy), Wynne, AR; brothers, Woody Reed Coker, Smithville, Billy Wayne Coker (Melissa), Amory; Mother-in-law, Sandy Beall, Tupelo; father-in-law, Terry Stacy, Shannon; sisters-in-law, Teri Lynn Griffin (Allen), Pontotoc, Christi Tate (David), Tupelo; brother-in-law, Jason Stacy (Jill), Mooreville; nieces and nephews, Mickey McGuire, Brian McGuire, Kristen Brunetti, Leanne Lindsey, Courtney Coker, Alan Coker, Kandi Hilliard, Sierra Rood, Layla Stacy, Whitney Stacy, A. J. Griffin, and Bret Griffin; special friends, Bro. Phil Kidd, Blake Wilson, and Joe Stanford. He was preceded in death by his father, Connie Reed Coke; brother, Gregory Allen Coker, and nephew, Billy Coker, Jr; brother-in-law, Rudy Johnson; special friend, Tony Wilson. A Celebration of Life Service will be held on Saturday, April 10, 2021, at 4:00 pm at First Christian Church of Aberdeen, 200 College Place, Aberdeen, MS. Visitation for family and friends will be from 2:00 pm until 4:00 pm at the church in Aberdeen, MS. Since there will be no burial, plants or arrangements are preferred for the service. Donations in lieu of flowers may be made to St. Jude’s Hospital, 501 St. Jude Place, Memphis, TN or to the Amory Humane Society, 1317 Old Hwy 6, Amory, MS 38821. Memories and condolences may be shared with his family at EEPickleFuneralHome.com

The family of James "Jamie" Bruce Coker created this Life Tributes page to make it easy to share your memories.

Send flowers to the Coker family.