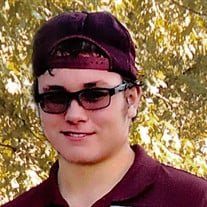 Starkville – James “Cliff” Files, 17, passed away on Easter Sunday, April 4, 2021, in Starkville, MS. Born on November 19, 2003, he was the son of Harold Files and Ginger Tibbett. Cliff grew up in Oktibbeha County, attending both Starkville Christian School and Starkville Public Schools. A sociable young man, he never met a stranger and enjoyed visiting with his family and friends. He was a member of Adaton Baptist Church and believed in God. Cliff often told others that he loved his family, his mom, dad, nana, brothers, and his sister. Cliff often sought the acceptance of others, and at times, his sensitive side would make him put forth a tough attitude in order to protect his big heart. In his downtime, Cliff liked to listen to Country music and rap music. He had a carefree attitude and enjoyed driving cars real fast. His friends knew him as loyal and they often liked chatting and hanging out with him. So many memories and friendships made through the years will be cherished. His family and friends are saddened with the sudden loss of Cliff. They will cling to the good memories shared throughout the years. The family knows that God is there with them, with this verse being their stronghold, Psalm 46:1, “God is our refuge and strength, a very present help in time of need.” His survivors include his father, Harold Files, Starkville; mother, Ginger Tibbett, Starkville; grandmother, Gin Tibbett, Starkville; sister, Candace Files White (Chad), Starkville; brothers, J.D. Files (Summer), Starkville, Wesley Files, Sturgis; uncle, R.D. Files, Jr.; great uncle, Mike Vandiver (Judy); great aunts, Janice Jones, Brenda Irvin (Bobby), Cathey Spann (Leslie); 3 nieces; 8 nephews; and 1 great nephew; numerous cousins; special friends, Dr. Renee Westbrook and her daughters, Chele and Katie Rose. He was preceded in death by his grandfathers, Jimmy Tibbett, R. D. Files, Sr., and Lottie Jones Files; great-grandparents, John Lewis Alverson, Jewel Alverson Vandiver, Laveda and Clarence Jones; uncles, Clifton Files, Billy Tibbett, Johnny Tibbett, James Alverson, and Doyle Summerford; aunt, Hilda Summerford A funeral service will be held on Friday, April 16, 2021 at 11:00 am at Adaton Baptist Church, in Starkville, MS with Bro. Hal Selby and Bro. Tom Daniel officiating. Burial will follow in Adaton Baptist Church Cemetery, Starkville with the Pallbearers being Mark Turner; Jamie, Joey, and Jonathan Forrester; Chris Wolfe; and Austin Miles. Visitation for family and friends will be held at the church in Starkville from 10:00 am until the service hour. Donations in lieu of flowers may be made to “World Changers” or “Refuge 461”, c/o Adaton Baptist Church, 872 MS-182, Starkville, MS 39759. Condolences and memories may be shared with his family at eepicklefuneralhome.com

The family of James "Cliff" Files created this Life Tributes page to make it easy to share your memories.

Send flowers to the Files family.