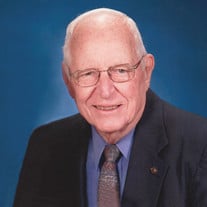 Wren- James F. Boyd, 87, passed away peacefully at home surrounded by his family on April 3, 2019. Born on December 14, 1931, in Dawson Springs, Kentucky. He was the son of the late Betsy and Albert Boyd. James was a graduate of Dawson Springs High School where he served as president to his senior class. He also obtained degrees from Draughn’s School of Business (Nashville, TN) and Austin Peay State University (Clarksville, TN). He met his life time partner Mary Layne from Monteagle, Tennessee while both were attending school in Nashville. This past March they celebrated their 67th wedding anniversary. From 1953 – 1973, James honorably served his Country in the US Air Force. He served in the air to field communication squadron in Alaska during the Korean War and in Thailand during the Vietnam War. Other tours during his 20 years of service included his family while being stationed at Itazuke AFB (Japan), Keesler Air Force Base (MS), Bergstrom AFB (Texas), and Fort Campbell (Kentucky). His military duties were managing, maintaining, and using communication equipment as well as instructing others on the techniques he had mastered. After his military retirement, he went on to teach middle school math in Clarksville, Tennessee (1974-1994). He devoted many after school hours to coach his school’s math team that consistently placed in state wide tournaments. As a teacher he also invested additional time to tutor struggling math students. After his retirement from teaching math and serving as vice-principal to his school, he relocated to Gulfport, Mississippi (1994-2003). As his wife’s health deteriorated with Alzheimer’s, he moved to northern Mississippi to be near his daughter and son-in -law. The last years of his life were spent as a devout caregiver. A hardworking gentleman, he was devoted to God, family, and his country. James loved the Lord and was a member of the First Baptist Church of Amory. As he was able, he attended Dr. Lewis’ Sunday School class. Throughout his years of service to the military and community he faithfully supported and participated in the churches he attended. In addition, he would quietly find a need in the community and make the necessary contributions he could whether through money or deeds. While he received various awards during his careers he would quickly contend his greatest satisfaction came from watching his wife, children, grandchildren, and others obtain their achievements. He loved sharing his homegrown tomatoes with his neighbors, catching fish from the pond, and cheering on Kentucky’s basketball team. His reminder to all of us was “to stop and smell the roses”. He had a green thumb and loved the time he spent maintaining his own yard and garden. His daughter and grandchildren fondly remember the many hours he spent with them playing board games. James will leave behind a legacy of dedication and service. Besides his parents, he was preceded in death by a son (James Boyd Jr.) and a sister (Linda Murphy). He is survived by his wife, Mary Rebekah of Wren; daughter Donna Jones (Glen) of Wren; grandchildren, Andy (Erin) of Huntsville, Alabama and Mary (Tyler) Sholes of Chattanooga, Tn: great grandchildren Joshua and Rebekah Sholes. The family also recognizes the devoted caregivers from Lifeline Companions in Amory, especially Tyrechia Ivory. The family is also appreciative of his nurse Elizabeth, assigned to him from NMMC. His funeral service will be held at E. E. Pickle Funeral Home on Sunday, April 7, 2019, at 1:30 pm. Burial with military honors will be on Monday, April 8, 2019 at 11:00 am at the Corinth National Cemetery, Corinth, MS. Visitation for family and friends will be held on Sunday, April 7, 2019 from 12:30 pm until 1:25 pm at the funeral home in Amory. He would best be honored by making contributions to the Children Ministry at First Baptist Church in Amory, Ms.

Wren- James F. Boyd, 87, passed away peacefully at home surrounded by his family on April 3, 2019. Born on December 14, 1931, in Dawson Springs, Kentucky. He was the son of the late Betsy and Albert Boyd. James was a graduate of Dawson Springs... View Obituary & Service Information

The family of James F. Boyd created this Life Tributes page to make it easy to share your memories.