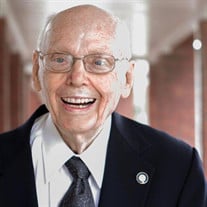 Jack Clifford “Soap” Francis, 95, of Amory, MS died on September 9, 2020 at Oak Tree Assisted Living. Born on February 20, 1925 in Verona to the late Wiley Clifford Francis and Ruby Sparks Francis, Soap grew up in Amory, graduating from Amory High School in 1942. Soap received his B.S. degree in 1947 and his M.S. degree in 1950, both from Mississippi State University. While at Mississippi State, Soap served as the Vice-President, Treasurer, and Secretary of the Student Body; was President of Pi Kappa Alpha fraternity; and was a member of Blue Key and Omicron Delta Kappa. Soap was a lifelong Mississippi State bulldog fan, past-president of the Mississippi State Monroe County Alumni Association, and he endowed a scholarship to be awarded to a Monroe County student each year. In his freshman year of college, Soap volunteered for World War II and served honorably as a First Lieutenant in the US Army Air Corps where he was Navigator on 35 missions from England over Germany. On Christmas Day 1944 during the Battle of the Bulge, three of nine bombers flying in formation out of Hethel Air Base were shot down. His crew’s B-24 Liberator took direct blasts before and after “bombs away”. The sorely crippled Liberator was escorted back across the English Channel by other bombers. After returning home from the war and serving 35 missions together, these crew-members maintained ongoing friendships. Soap opened Francis Insurance in Amory in 1954. In 1956, Soap married Mary Elizabeth (“Mary Lib”) Barrett, and in 1965, they started a second business, Francis Realty, owning the insurance business until 1990 and the real estate business until 1995. He was on the Board of Directors of Mississippi Mutual Insurance Association and was elected president in 1964 and 1965. He was a member of the Amory Board of Directors for National Bank of Commerce, currently Cadence Bank. An active member of First Baptist Church in Amory, he was a Deacon and a member of the building committee for the present sanctuary, offices, and multi-purpose building. Soap served as a Sunday School teacher and department superintendent for 40 years and for many years as an usher and a greeter with a pocket full of peppermints and a warm smile for everyone. Soap was an enthusiastic Rotarian, attending Rotary Club meetings across the globe to maintain over 60 years of perfect attendance. He was a past-president of the Rotary Club of Amory, where he had been named the club's first Rotary boy of the month as well as its first Paul Harris Fellow. Over the years, he endowed a number of Paul Harris Fellowships to benefit The Rotary Foundation to help achieve the goal of eradicating polio. For over 20 years, he served as chairman of the semi-annual Rotary Ladies’ Night dinners and programs. He and his family also hosted a Rotary Exchange Student from Australia. He was the honoree of Roasts by the Amory Rotary Club in 1989 and again in 2013, when he was affectionately named “Ultimate Rotarian,” and he was recognized for his outstanding dedication and accomplishments by the District. Soap enjoyed playing tennis and taking long bike rides down the Natchez Trace. He appreciated traveling across the US and abroad, especially to collect frequent flyer miles and meet new friends along the journey. He loved musical theater and was an original foodie. Soap is survived by his wife of 64 years, Mary Lib Francis. Soap was preceded in death by their son, Jack Barrett Francis, who died in 2002, and is survived by Barrett's children, Mary Paige Francis Hyland (Steven) of Jackson and Madison Barrett Francis (Lauren) of Boston. He is also survived by his daughter Mary Elizabeth “Beth” Francis, and her husband, Dr. Vic Ross and their children Ruby Francis Ross, Violet Margueritte Ross, and Lulu Elizabeth Ross of San Diego, California, and by his daughter Patricia Ann “Patti” Francis and her children Barrett Francis Griffin and Amory Francis Griffin of Washington DC. Memorials may be made to First Baptist Church, Amory, MS. Please share your condolences and memories with his family at eepicklefuneralhome.com.

The family of Jack "Soap" Francis created this Life Tributes page to make it easy to share your memories.

Send flowers to the Francis family.