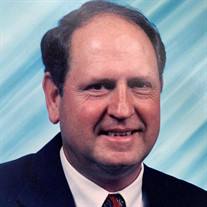 Smithville - J.W. Vann passed away August 24, 2020, at North Mississippi Medical Center in Tupelo, Mississippi, from complications of sepsis and joined God in heaven at the age of 77. J.W. was born on March 11, 1943, near Detroit, Alabama, and lived the majority of his early years in the Splunge area of Monroe County. His working life was mainly spent at Walker Manufacturing in Aberdeen, Mississippi, and at Gilmore Memorial Hospital in Amory, Mississippi. He also served in the Alabama National Guard with a unit in Sulligent, Alabama. He is a member of Smithville First Free Will Baptist Church. He married the love of his life, Carolyn Hargett Vann, on November 23, 1963, and they moved to Smithville, Mississippi, in 1965 where they lived until his passing. His adult life was devoted to his family and to Southern Gospel music. He was a member of multiple singing groups, including The Pilgrims, The Builders, and The Labourers. He also enjoyed traveling with his family. J.W. is survived by his wife, Carolyn; his daughters, Stephanie Ford (Craig) and Marian Boykin (Jay); his grandson, Jacob Robertson; his sister, Mildred Vann Tate; and his brothers, Brown “Brownie” Vann (Frances) and Barney Vann (Audrey). He was preceded in death by his parents, J.B. Vann and Mary Lee Brown Vann; his sister, Mary Magdalene Vann; and his brothers, L.J. Vann, Donald Gene Vann, J.C. Vann, and three infant boys. Visitation will be held 6 p.m. until 8 p.m. Friday at Smithville First Free Will Baptist Church in Smithville, Mississippi. His funeral will be held 1 p.m. Saturday at the church with Bro. Edward Puckett and Bro. Bobby Duncan officiating. All visitors must wear a mask and socially distance while inside the church. The service can also be viewed live on the Facebook page of Smithville First Free Will Baptist Church. J.W. will be laid to rest following the service at Jones Chapel Cemetery near Nettleton, Mississippi. The family will sing hymns. Visitors can either stay in their cars or wear masks and socially distance at the gravesite. Pallbearers will be Kevin Tate, Michael “Mikey” Tate, Jerry Blaylock, Ronnie Sloan, Donnie Sloan, and Eddie Little. Honorary Pallbearers will be Charles Cochran, Ronald Watson, W.D. Holcomb, Billy McClemore, Gary Ryan and Chris Champion. The family would like to thank everyone for their support during this difficult time.

Smithville - J.W. Vann passed away August 24, 2020, at North Mississippi Medical Center in Tupelo, Mississippi, from complications of sepsis and joined God in heaven at the age of 77. J.W. was born on March 11, 1943, near Detroit, Alabama,... View Obituary & Service Information

The family of J.W. Vann created this Life Tributes page to make it easy to share your memories.

Send flowers to the Vann family.