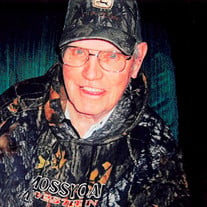 Detroit - Howard Emmett Esteb, 92, died peacefully at his residence on September 6, 2017. Born on April 2, 1925 in Martinville, Indiana, he was the son of the late Emmett and Lillie Osley Esteb. Howard was raised by a very special friend, Pappy Nevel. He joined the U.S. Navy in February of 1942. Proudly serving our country during World War II, he served on the USS Monterey Gunship as a gunnery. After his time in the Navy, he was an engineer for Payloader and Huff. Later in life, Mr. Esteb relocated to the south and served in various positions within the town of Detroit, Alabama. He was a member of the city council, water department, and fire department. Mr. Esteb was a Godly man who served as pastor of Carter Freewill Baptist Church in Detroit, Alabama and Antioch Baptist Church in Antioch, Ill. He devoted his life to the Lord and helping others. He leaves a legacy that will last a lifetime. Mr. Esteb is survived by his wife, Eloise Esteb who he married on July 27, 1996; a daughter, Patricia Jones (Russell), Long Beach, Mississippi; sons, Dale Esteb, Greenwood Springs, Howard Esteb (Lisa), Salem, Wisconsin, Dale Humphreys (Sherian), Smithville, and Leon Humphreys (Mary Ann), Detroit, Alabama; a sister, Jean Redmann (Richard), New York; a host of grandchildren and great-grandchildren. In addition to his parents, he was preceded in death by a son, Jimmy Esteb; his first wife of 43 years, Margaret Esteb; 2 grandsons, Justin Jones and Jimmy Esteb. Funeral Services for Mr. Esteb will be at 2:00 P.M., Saturday, September 9, 2017 at E.E. Pickle Funeral Home Chapel in Amory, MS. Bro. Bill Marchbanks, and Bro. Richard Dubielack will be officiating. Burial will be at Shake Rag Cemetery in Sulligent, Alabama. Pallbearers will be Michael Edington, Arlin Glenn, Lance Jones, Dustin Chavis, Andrew Marchbanks, and Colin Wilson. Honorary pallbearers will be the nurses, CNAs and staff of AseraCare Hospice of Hamilton, Alabama. Visitation for Mr. Esteb will be on Friday evening, September 8, 2017 from 5:00 – 8:00 P.M. at E.E. Pickle Funeral Home, Amory, MS.

Detroit - Howard Emmett Esteb, 92, died peacefully at his residence on September 6, 2017. Born on April 2, 1925 in Martinville, Indiana, he was the son of the late Emmett and Lillie Osley Esteb. Howard was raised by a very special friend,... View Obituary & Service Information

The family of Howard Esteb created this Life Tributes page to make it easy to share your memories.

Send flowers to the Esteb family.