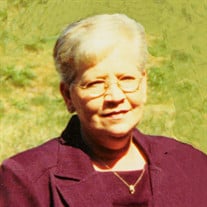 Amory – Holly Gail Adams Clayton, 69, passed away on Wednesday, January 20, 2021 at North Mississippi Medical Center – Gilmore, Amory, MS. Born on November 4, 1951, she was a daughter of the late Alfred Clinton Adams and Emma Jean Renfro Adams. Gail grew up in a large family with five other siblings so she learned early the importance of family. She graduated from Hatley High School and then later furthered her education through the United States Army. She married the love of her life, Jimmy Clayton, on August 16, 1969. He served in the United States Army, so they moved different places and Gail was always the loyal supportive wife. They were blessed by God with two children. Gail was a great wife, loving mother, and she helped support her family. She worked many years at Gilmore Memorial Hospital where she served as a ward clerk. She made many friends through her years of service at Gilmore. Gail was Baptist and she loved the Lord. She had a heart of gold and she believed in speaking the truth. Some might say she was out spoken but she was just strong willed and independent, having experienced many things throughout her lifetime. In her free time, she liked to shop and read books and listen to any type of music. Above all, she loved being with her husband and family, especially her grandchildren and great grandchildren. Although her passing feels too early, they are all thankful for the many years of love and memories they were given. She will always be remembered and she passes on a great role model for her family to follow. She is survived by her loving husband, Jimmy, Amory; daughter, Charlene Moore (Joey), Fulton; grandchildren, Nathan Moore (Taylor), Annie Moore (Jacob); great-grandchildren, Avery Moore, Rylie Moore, and Noah McDaniel; sisters, Brenda Jean McCool, Splunge, Peggy Whitaker (Mike), Smithville, and Susan Smith, Amory; brother, Richard Adams (Betty), Fulton; numerous nieces and nephews; special friends, the co-workers at Gilmore Hospital. In addition to her parents, she was preceded in death by her son, Matthew Wayne Clayton; her brother, Ronnie Adams; her in-laws, James Clayton III, Virginia Qualls; and her brother-in-law, James McCool. A funeral service will be held on Sunday, January 24, 2021 at 2:00 pm at E. E. Pickle Funeral Home in Amory, with Bro. Bubba Kennedy officiating. Burial will follow in Hatley Cemetery, Hatley with the pallbearers being Aaron Smith, Rickey Roberts, Michael Whitaker, Richard Adams, Mike Boyd and Jessie Adams. Visitation for friends will take place on Sunday at the funeral home from 12:00 pm until the service hour. Memories and condolences may be shared with her family at EEPickleFuneralHome.com.

The family of Holly Gail Clayton created this Life Tributes page to make it easy to share your memories.

Send flowers to the Clayton family.