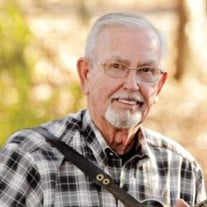 Cason Community - Hershel Dean Hood transitioned to Heaven on May 16 with his family by his side as his sweet daughter-in-laws sang “It Is Well with My Soul”. He was in the NMMC CCU after suffering a massive heart attack on May 6 at his home. Hershel was retired from the Burlington Northern Santa Fe Railroad after working there for 30 years as a conductor. He was a Master Sergeant in the Army National Guard. He was the maintenance contractor at Tschudi Courts in Amory for 15 years and Crestview apartments in Okolona where he was dearly loved. Hershel served in law enforcement with the Monroe County Sherriff’s Department for 17 years as an auxiliary deputy. Hershel served the Lord at Cason Baptist Church where he served as the choir director, one of the musicians, deacon and children’s worker. He was a lifelong musician playing in the Nite-Liters band whose record, “Little Band of Gold’ reached the top ten in the charts in England. He also played for the Singing Prophets Quartet. He was inducted into the Rock-A-Billy Hall of Fame. He also drummed for Elvis on several occasions. Hershel was a fun part of the Carolina Community pickin’ session on Monday Nights. Hershel will be remembered for his kind soul and for helping others. Hershel leaves his wife, Ann Oliver Hood of 56 years; his sons, Gregory Dean Hood (Joan) and Andrew “Andy” Hood (Tammy), both of Amory; Grandchildren: Micah, Lexi, Leah and Aaron (Edie); Sister, Judy Holman, Amory; Brothers, Billy Ray Hood (Ann), Amory and Lamar Hood, Jr. , Grenada; In-laws, Kay & Ray Hurst , Pensacola, Fl and Joe & DeWanna Oliver of Algonquin, Il; a host of nieces and nephews who adored their Uncle Hershel. He was a father figure to many a kid and had many special friends. He is preceded in death by his parents, Lou Ollie Adams Hood and Lamar “Barley” Hood, Sr; his brother, Jerry Hood; and his grandson, Camden Hood. Funeral services for Hershel Hood will be at 11:00 AM, Wednesday, May 19, 2021 at Cason Baptist Church with Dr. Greg Hood and Dr. Ron Oliver officiating. Pallbearers will be Greg Hood, Andy Hood, Dr. Ron Oliver, Micah Hood, Michael Carroll, and Ronnie Hood. Burial will follow in Haughton Memorial Park. Visitation for Mr. Hood will be on Tuesday evening from 6:00 – 8:00 PM at the church. In lieu of flowers, memorial may be made to the Camden Hood Foundation, Inc, P.O. Box 626, Amory, MS 38821 Condolences and memories may be shared with his family at eepicklefuneralhome.com

Cason Community - Hershel Dean Hood transitioned to Heaven on May 16 with his family by his side as his sweet daughter-in-laws sang &#8220;It Is Well with My Soul&#8221;. He was in the NMMC CCU after suffering a massive heart attack on May 6... View Obituary & Service Information

The family of Hershel Dean Hood created this Life Tributes page to make it easy to share your memories.

Send flowers to the Hood family.